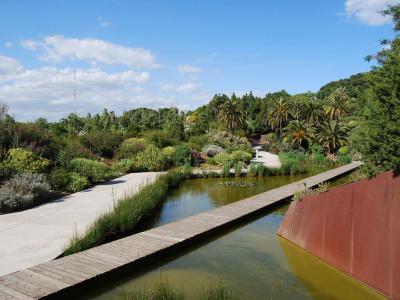 The Barcelona Botanic Garden is located near the stadiums where the Olympic Games held in 1992. It was inaugurated in 1999. The garden is divided into areas with botanical treasures originating from specific areas of the world such as South Africa, California, Australia, Chile, the Western Mediterranean, Eastern Mediterranean and the Canary Islands.

The botanic garden has an area of 33 acres which has been built on a rather steep, sloping ground. It comprises a huge variety of plants with over 72 plant communities from all over the world.

In a city known for its innovative designs of architecture, it is not surprising that the layout of this botanic garden is unconventional. Instead of the square botanical gardens normally seen elsewhere, this one has been created in the form of a series of triangular areas allotted to different divisions. This botanical garden truly proves that Barcelona has more than just the treasure of historic relics and ancient buildings and structures. It is indeed a treat for all plant lovers.
Image by Felix König on Wikimedia under Creative Commons License.