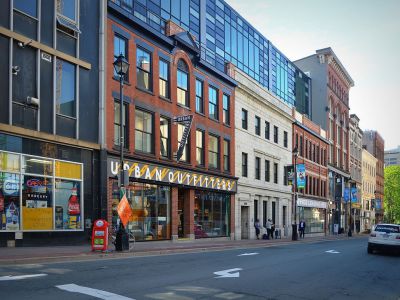 Barrington Street is a street that follows the waterfront in Halifax. This primary city street runs from the MacKay Bridge to Inglis Street. At about seven-miles long, the street is an excellent one to enjoy when visiting the city.

Barrington Street is one of the original streets of Halifax. It was once the main commercial street in the city. Now, it is one of the primary streets for tourism.

Some of the notable places along Barrington Street include the Halifax Shipyard, Peace and Friendship Park, the Grand Parade, Halifax City Hall, Casino Nova Scotia, the Old Burying Ground, Province House and the Khyber.

Barrington Street has many places to eat and shop. An entire day can easily be planned simply walking from one end to the next while stopping at each of the interesting spots along the way. Due to its location near the water, it is easy for visitors to take a break away from the street and view boats coming in and out of the harbor.
Image Courtesy of Wikimedia and Citobun.

Want to visit this sight? Check out these Self-Guided Walking Tours in Halifax. Alternatively, you can download the mobile app "GPSmyCity: Walks in 1K+ Cities" from iTunes App Store or Google Play. The app turns your mobile device to a personal tour guide and it works offline, so no data plan is needed when traveling abroad.

Between the impressive waterfront and colorful, bustling streets, Halifax is a picturesque city. Much of its fascinating history is duly reflected in the local architecture. There are a number of historical landmarks in Halifax, including the time-honored buildings, palaces, and churches, where you can learn much about its glorious past.

The presence of these historical locations is bound to...  view more

Halifax is located on the ancestral lands of the Mi'kmaq who lived in the area long before Europeans arrived. Mi'kmaq called the area "Great Harbor". The city itself was established by the British in 1749 in violation of treaties with the Mi'kmaq. The establishment of the city led to Father le Loutre's War, otherwise known as the Anglo-Micmac War.