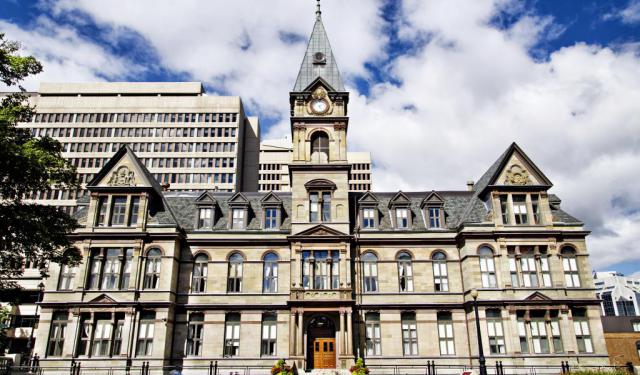 Image by Boris Kasimov on Flickr under Creative Commons License.

Halifax, a city with a rich and fascinating history, contains a lot of historic architecture. Some landmarks reflect its culture, while others its political past, like the House of Assembly. Other sites speak of its development in education, such as Dalhousie University and the University of King's College.
How it works: Download the app "GPSmyCity: Walks in 1K+ Cities" from iTunes App Store or Google Play to your mobile phone or tablet. The app turns your mobile device into a personal tour guide and its built-in GPS navigation functions guide you from one tour stop to next. The app works offline, so no data plan is needed when traveling abroad.

The clock tower is a three-tiered (three storey), irregular octagon tower built atop a one storey white clapboard building of classic Palladian proportions. It was erected on the east slope of Citadel Hillfacing Barrack (now Brunswick) Street. The clock face is 4-sided displaying Roman numerals. As with most clocks the "4" is shown as IIII for aesthetic symmetry and not as IV. Its bell strikes hourly and quarterly and the durability of the mechanism (which dates to the original installation) is attributed to its slow movement. The Town Clock began keeping time for the garrison on October 20, 1803.

Image by lisabirtch on Flickr under Creative Commons License.
Sight description based on wikipedia
2

Designed in an eclectic, monumental style, the building is of cream and red sandstone, laid in the freestone technique. It also features granite construction on the ground floor and in the tower. The seven-storey tower has clock faces on the north and south sides. The northern face is fixed at four minutes past nine to commemorate the Halifax Explosion of 1917.

Image by Gillian on Flickr under Creative Commons License.
Sight description based on wikipedia
3

The Nova Scotia House of Assembly, also known as the Province House, has hosted the city legislature since 1819. Constructed in a classic British Palladian style, it is considered one of the most beautiful architectures in North America. Undergoing many renovations from 1985 to 1994, its reopening was attended by the Queen Elizabeth II.
Image by cphoffman42 on Flickr under Creative Commons License.
4

Government House's overall style is one of Georgian with hints of Adam, elements of the main and rear facades having been taken from a book of house plans published in 1795 by George Richardson, a former employee of Robert and James Adam. Many of the materials, however, were acquired locally; the stone came from Antigonish, Bedford Basin, Cape Breton, Lockeport, Lunenburg, and Pictou, brick from Dartmouth, and pine from the Annapolis Valley, Cornwallis, and Tatamagouche. Imported materials came from New Brunswick, Newfoundland, England, and Scotland; notably, the marble fireplace mantles were made in London. These adorned an interior arranged for both entertaining and state business, including a drawing room, dining room, and ballroom for formal entertaining, as well a suite for the Governor, his family, and servants. At the time, Nova Scotia had no equal in design and decoration.
Image by cphoffman42 on Flickr under Creative Commons License.
Sight description based on wikipedia
5

The Halifax Public Gardens are Victorian era public gardens formally established in 1867, the year of Canadian Confederation. The gardens were designated as a national historic site in 1984. The Public Gardens encompass 16 acres and are bounded by Spring Garden Road, South Park Street, Summer Street and Sackville Street. They are open annually from approximately May 1 until November 1. The landscaping style is Victorian formal and provides a popular setting for wedding and prom photos.

In addition to statues and extensive flower beds, there are three fountains, two stone bridges, three ponds (one large and two small), and a small concession building (located in the original Horticultural Hall). The gardens also feature a bandstand that is used for free public concerts on Sunday afternoons during the summer. There are celebrations in the gardens every year on Canada day (July 1st) and Natal Day (the first Monday in August). In the past, many people enjoyed feeding the ducks who make the gardens their home, although it is now prohibited.
Image by msprague on Flickr under Creative Commons License.
Sight description based on wikipedia
6

The Burbidge Building, formerly the Medical Science Building, is the oldest structure of the Dalhousie University campus. Designed by Andrew R. Cobb, it was built in 1922. Constructed mainly of tapestry bricks, granite and Wallace stones, it housed the faculties of Pharmacology, Physiology and Biochemistry. In 1970 the building received its present name in honor of George A. Burbidge, the first Dean of the Pharmacology Department. In 1978 a third floor was added, with more recent renovations done in 2001.
Image by striatic on Flickr under Creative Commons License.
7

The Forrest Building, a part of Dalhousie University, was financed by the donation of Sir William Young. Built in 1887, it was designed by J.G. Dumaresq. This three-story red brick building was a unique construction at the time it was built. Since its establishment it has undergone several renovations.
Image by ktylerconk on Flickr under Creative Commons License.
8

Shirreff Hall is the oldest residence hall still in use at Dalhousie University in Halifax. It consists of four 'houses'; Old Eddy, New Eddy, Newcombe and The Annex. In total, the maximum capacity of the building is 451 students. Shirreff Hall was built in response to a looming housing crisis for female students of Dalhousie University. In the early 1920s, female students accounted for over twenty percent of the university's population. There were no university residences, and landlords in the Halifax area tended to prefer male tenants. Plans for a female-only residence hall were drafted, but no finances were available due to the construction of the Science Building and the Macdonald Memorial Library.
Image by Brent Eades on Flickr under Creative Commons License.
Sight description based on wikipedia
9

The University of King's College, one of the city's most important historic sites, was erected in Winsdor and rebuilt in Halifax in 1920 after being destroyed by fire. An associate of Dalhausie University to the present day, from 1941 to 1945 it was used to train police officers. In the 1970s it accentuated its religious aspects and remains a prestigious learning institution to this day.
Image by Robert Alfers on Wikimedia under Creative Commons License.