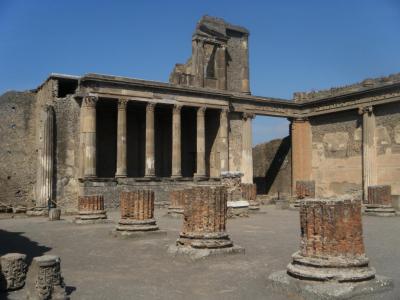 The Basilica stands on the left hand side of a large square, which has the Forum at its centre. It is the oldest Roman Basilica ever discovered, and has stood here since the 2nd century BC. This was one of Pompei’s most important buildings, housing the town’s law courts, as well as halls for commercial and financial transactions. The main entrance was located on one of the building’s two short sides, behind a portico. The portico contains 28 columns, which are made of cut tiles. There is some debate over whether these thick columns held a complete roof, or whether the centre of the building was open to the elements.

Immediately next to the entrance is where the tribunal, or law court, still stands. Dominating one side of the Basilica building, it consists of a two metre high podium originally topped with six Corinthian columns. There are no stairs down from the podium, suggesting that temporary steps were used for judges to access it, preventing members of the public from reaching them whilst passing judgment. The outside walls of the Basilica are made of painted stucco, much of which has been preserved by the ash falls which buried the city in 79 AD.
Image by Paul and Jill on Flickr under Creative Commons License.