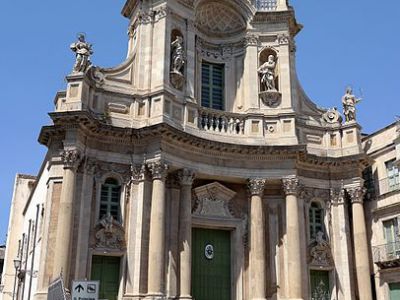 The Basilica della Collegiata is a church in Catania. The church was built in the early 18th century, after the earthquake of 1693 that had destroyed most of the city. The design of the church is attributed to Angelo Italia, who changed the orientation of the previous edifice destroyed by the earthquake, in order to have it facing the new via Uzeda (current Etnea Street) according to the rebuilding plan of the city.

The façade, designed by Stefano Ittar, is one of the most notable examples of Sicilian Baroque in Catania. It has two orders, the first of which featuring six stone columns, surmounted by a balaustrade. The second order has a large central window, with, at the sides, four large statues of St. Peter, St. Paul, St. Agatha and St. Apollonia. Over the second floor is a central element housing the bells.
Image by Luca Aless on Wikimedia under Creative Commons License.
Sight description based on wikipedia