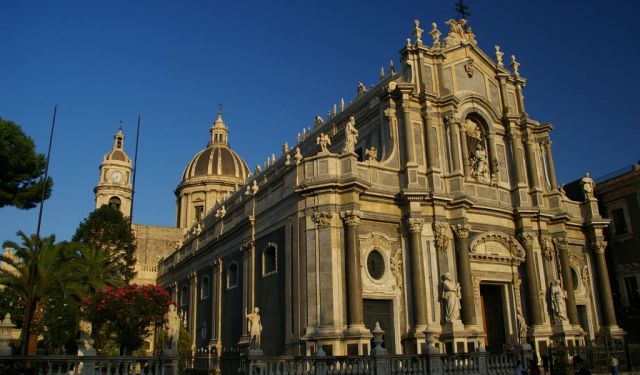 Catania is a city of many churches that make its streets look so beautiful and historical. The churches in this city go back many centuries and represent the magnificent architecture of those ancient times. You will contemplate the rich decorations of gold, bronze and marble inside the impressive buildings. This self-guided tour will lead you through the most important religious sights of Catania.
How it works: Download the app "GPSmyCity: Walks in 1K+ Cities" from iTunes App Store or Google Play to your mobile phone or tablet. The app turns your mobile device into a personal tour guide and its built-in GPS navigation functions guide you from one tour stop to next. The app works offline, so no data plan is needed when traveling abroad.

1) Cathedral of Catania (must see)

Agatha was a pious virgin from a noble Catania family in 231 AD. The Roman prefect Quintianus made amorous moves on her. She rebuffed him. He martyred her. But things went bad for Quintianus. His horse kicked him in the river. He hasn't been seen since.

The Cathedral of Catania, also known as Cathedral of Saint Agatha, stands in the Cathedral Square (Piazza del Duomo). It is built in Italian Baroque style. The facade was fashioned in 1700 after a devastating earthquake in 1693. It has three levels with niches and columns of Corinthian granite.

The main entrance has a carved wooden door showing 32 plaques of the life of the Saint. The dome was created in 1802. The bell tower is a rebuilt. A parvis with a white stone balustrade harbors five statues of saints in Carrara marble.

The interior has a Latin Cross plan and three naves. The apse dates from the 12th century. In the north transept is the Chapel of the Holy Crucifix. The cathedral holds the tombs of Vincenzo Bellini, the great Italian composer, and King Frederick III, John of Randazzo and Constance of Aragon.

They say Saint Agatha protects Sicily against enemies, corrupt officials and even Mount Etna. Carved into the facade of the cathedral are the letters N.O.P.A.Q.V.I.E. which are the initial letters of each word in a sentence in Latin that says "Agatha will revenge any injustice perpetrated by those who offend her land".


Image by Matthias Süßen on Wikimedia under Creative Commons License.
2

2) The Church of the Abbey of Saint Agata

The Church of the Abbey of Saint Agata is situated near the Cathedral of Catania and is one of the major monuments of Baroque Catania. The abbey stands on the ruins of the ancient church of Saint Agatha. The facade is decorated with palms, lilies and crowns, which are symbols of St. Agatha. The building also features an impressive dome and statues of saints. The interior boasts beautiful religious paintings and impressive marble altars.
Image by Giovanni Dall'Orto on Wikimedia under Creative Commons License.
3

In 1334 the Church of Saint Benedict of Nursia was completed. In 1693, like most of Catania, the church was destroyed by the great earthquake. Only five nuns lived to tell the tale. In 1714 the church was rebuilt but the monastery was not finished until 1763. Rebuilding was mainly the the work of architect Giovanni Battista Vaccarini.

The facade has pilasters and several statues. The pediment of the tympanum has two feminine figures representing Fortitude and Temperence. Above the entrance is a statue of the Virgin Mary. The wooden main door has panels showing scenes from the life of Saint Benedict. The marble Angel Staircase has angels and railings of wrought iron.

The interior has one nave. It is lushly adorned with stucco and frescoes on the walls, vault and semi-dome. Artists include Matteo Desiderato and Giovanni Tuccari. Pictures of the life of Saint Benedict are everywhere in scenes both lively and cheerful. The main altar is of polychrome marble with panels of bronze.

The church is open Tuesday, Friday and Saturday from 10am to 5pm.
Image by Urban on Wikimedia under Creative Commons License.
4

Church of Saint Francis Borgia or Chiesa di San Francesco Borgia is one of the spectacular churches in Catania; it stands next to the Church of St. Benedict. It was built in Baroque and Romanesque styles. There are many things to see, for example, magnificent stairs, Roman style façade and many white marble columns. There are paintings of famous Italian painters from the 18th century at the altars inside the church. The dome is decorated with frescoes that represent the Jesuit order. All frescoes of the church are of great historical and artistic value.
Image by Effems on Wikimedia under Creative Commons License.
5

Church of San Giuliano is a must see in Catania as it is considered one of the city’s most beautiful churches. It was constructed in the 18th century and preserved valuable religious art created by famous Italian artists from that era. The church is oval in form. There is an impressive painted dome that illuminates the interior of the church, many different marble statues, a golden altar and other interesting things. Its curved facade and its simple lines give the church building an appearance of rare elegance.
Image by Effems on Wikimedia under Creative Commons License.
6

Formerly a Benedictine establishment, the monastery is located at Dante Square in Catania. It is part of Val di Noto Works Heritage Site. There are no monks to be found on the premises but the humanities department of the University of Catania has found a home here.

Rebuilding commenced in 1702 and continued until the monastery was confiscated by the government in 1866. The current monastery rests on top of the original one (what was left of it). It has a new cloister and area designed by Giovanni Battista Vaccarini.

The original monastery used a square floor plan. A cloister in the center was called the "marble" cloister. It had a marble colonnade and a clover shaped fountain with refined renaissance decorations. In 1693 all this was destroyed.

The "Marble" cloister was rebuilt with late baroque decorations. The Eastern Cloister was a new addition. A new area on the North side was also added.

Giancarlo De Carlo, architect, has said, "...the old meanings have been substituted by a new one that allows the old architecture get a new structure and an important role for the contemporary world."
Image by Nicolò Arena on Wikimedia under Creative Commons License.
7

Church of Santa Maria dell'Aiuto is a beautiful church that faces the square with the same name. It boasts splendid artistic architectural features. This church was originally dedicated to St. Peter and later to Santa Maria, as there was a beautiful statue of Madonna on the street close to the church. The statue was placed in the church, which got its name from the statue. The church was destroyed by the great earthquake in 1693 and then rebuilt.
Image by Pequod76 on Wikimedia under Creative Commons License.