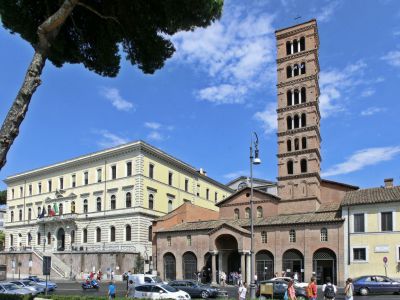 Located at Piazza della Bocca della Verita, the Byzantine style Basilica of Saint Mary in Cosmedin (Italian: Basilica di Santa Maria in Cosmedin or de Schola Graeca) was built in the 6th century, later rebuilt in 1124 and got a new facade in the 18th century. The current interior has a nave with two aisles: these are divided by four pilasters and eighteen ancient columns. In the side walls, some of the old columns of the Statio Annonae are included. Other fragments of the ancient building can be seen in the crypt. Its bell tower is the tallest medieval belfry in Rome.

The church is home to the la Bocca della Verita, an ancient sculpture thought to be a drain covering, located in its portico; but it is worth visiting primarily for its exceptionally well preserved early medieval choir enclosure and its very fine Cosmatesque pavement. The 1st-century sculpture is believed to represent an ancient god of the Tiber River and was originally part of a fountain. It was relocated to Basilica di Santa Maria in Cosmedin in the 17th century.

***Movie "ROMAN HOLIDAY" ***
The Mouth of Truth ('Bocca della Verita'), considered the funniest scene in the movie 'Roman Holiday', is where Joe Bradley puts his hand into the sculpture's mouth at Basilica di Santa Maria in Cosmedin. According to legend, it would nip off the hand of a liar who'd put it in its mouth. In the film, Audrey Hepburn's reaction to the nipped Gregory Peck's hand was not an act, as he decided to pull a gag without telling her beforehand.

Why You Should Visit:
Most people come here to see the 'Bocca della Verita' (for a fee), but do take some time to visit the interior as well – you'll be amazed by the skill and beauty of the mosaic of tiles under your feet.
The exterior has a unique look, with its porches and slender bell tower.

Tip:
Across from the church is more ancient architecture in a grassy park with a fine fountain.