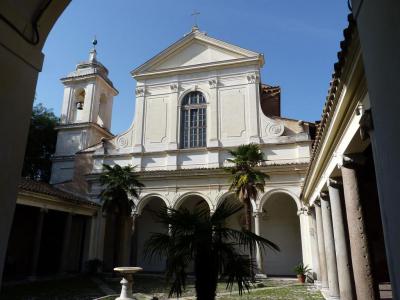 Travel back 2000 years of history when you visit the richly decorated Basilica di San Clemente al Laterano. This ancient church was a private home that was the site of clandestine Christian worship in the 1st century. It become a grand public basilica by the 4th century, reflecting the emerging Catholic Church's growing legitimacy and power. The present church was built just before the year 1100 during the height of the Middle Ages.

In the 1st century AD the house of the Roman Consul Titus Flavius Clemens stood on the site of the basilica. In the cellars of the house was a Mithraeum with an altar shaped like a sarcophagus bearing a relief of Mithras slaying a bull, a bust of the god Sol and a statuette of Mithras. These relics can still be seen in the crypt of the church. In the 4th century, the first basilica was built on the site of Titus Flavius’ house, dedicated to Pope Clement I.

In 1084, the church was destroyed during the Norman sacking of Rome, and a second basilica was constructed in its place. The church has the second largest collection of early medieval wall paintings in Rome. The Episcopal Seat is to be found in the apse, which is extensively decorated in Byzantine arabesque mosaics. In the presbytery, a ciborium, supported by four marble columns, stands over a shrine of Clement, whose tomb is to be found in the crypt below. The beautiful stucco work, frescos and Ionic capitals, as well as the carved, coffered ceilings of the aisle and nave, date back to the 18th century.

Why You Should Visit:
A very interesting glimpse into the ancient past – below street level!

Tip:
Bring a small flashlight to get a better look at the frescos and wall paintings.