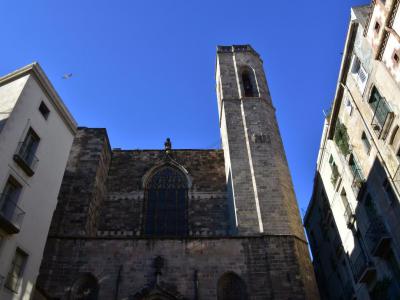 One of the city's oldest churches, the Basilica of Saints Justus and Pastor was an ancient royal chapel until the 15th century. According to legend, it is built on the site of Barcelona’s first Christian temple, in memory of the two great martyrs who lost their lives in 304 AD. According to Roman poet Prudentius, the boys protested the persecutions of Christians by the Roman Emperor Diocletian. They were caught, flogged, and beheaded outside the Spanish city of Alcalá de Henares. Some of the relics that once belonged to these two saints have been preserved in a chest and are kept in the basilica.

Back in the Middle Ages, the square in front of the church was the only place of Barcelona where Jews and Christians were allowed to trade legally together. A testament to that period is the 14th-century fountain, where all sorts of commercial dealings and information exchange took place. This fountain is the oldest water source in Barcelona, although its present appearance – featuring three human faces carved in stone under a relief of Sant Just among two shields – was designed in the 19th century.

Tip:
If hungry and wishing to soak up the atmosphere of the square, have a meal at the Cafè de l'Acadèmia (Mon-Fri: 1–4pm / 7–11pm) across the road – a popular dining spot in the Gothic Quarter.

Guided tours (with prior reservation):
Mon-Sat: 11am / 12:30pm / 4:30pm
Image by Richard Mortel on Flickr under Creative Commons License.