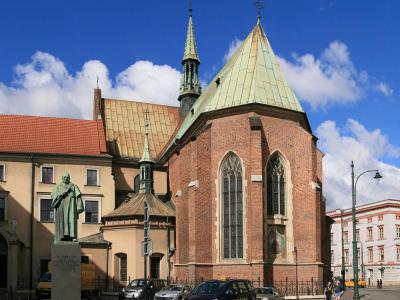 The window is a masterpiece not only of this art but also of the artist, Krakow's native son Stanislaw Wyspianski. It depicts Creation in a way no other art work in the world has been able to do till date. The fact that it adorns a basilica and is illuminated by natural light everyday belittles every living soul and forces us to pause every other thought and admire His Creation, the world we live in.

Don't be fooled by its plain red brick exterior. Step inside to admire the magnificent art noveau murals and beautiful stained glass - you will be impressed. It is no surprise that St. Francis is the first church visited by Pope John II after arriving in Krakow.
Image by Ludvig14 under Creative Commons License.