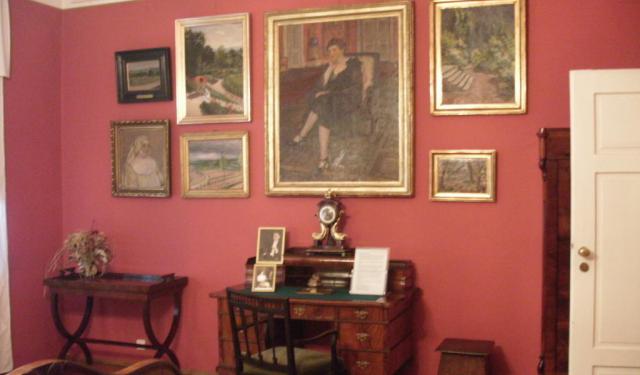 Image by AlbertHerring on Wikimedia under Creative Commons License.

Well-preserved historical buildings can often tell the stories of their city more vividly than any history book can. Krakow, the old capital and culture center of Poland, for many years has been the home of many important Poles. Today their former dwellings have been converted into museums so that visitors can learn about their ex-residents and see what life was like in the past. On this self-guided walking tour you will have a chance to discover Krakow's past by visiting some of its historical houses.
How it works: Download the app "GPSmyCity: Walks in 1K+ Cities" from iTunes App Store or Google Play to your mobile phone or tablet. The app turns your mobile device into a personal tour guide and its built-in GPS navigation functions guide you from one tour stop to next. The app works offline, so no data plan is needed when traveling abroad.

Although museums may be the only window to look at how life was in yester years, rarely do you actually come across one that gives you a feel of how life was back then. The Hipolit House is one of the rare examples which give its viewers an experience of how everyday life was way back in time.

The Hipolit house was once owned by a wealthy Italian merchant family in the 17th century who went by the same name. The mansion saw a number of wealthy families throughout its years and underwent many renovations of its interiors. Today, the museum proudly displays life that the aristocrats lived in 17th century Krakow. Each room of the House is specially decorated to give it a look of the life in Krakow between the 17th and the 20th century.

Interesting exhibits include the Collector’s Room, Young Lady’s Bedroom, The Study and Granny’s room. With intricate details like fabric, furniture, paintings and decorations, one is bound to get transported to the 17th century and so on. This museum is highly recommended if you are a curious about the day to day activity of the years gone by.

Image by Agata 89 on Wikimedia under Creative Commons License.
2

One of the most renowned Polish artists, Jan Matejko was known for his romantic oil paintings where he beautifully brought out the emotion of the subject on canvas. He is also known for paintings that depict war and political unrest and scenes from the courtroom. He is believed to have instilled a sense of brotherhood in the people of Poland when the country was split due to political unrest. Some of his known oils include 'Battle of Grunwald', 'Stańczyk', 'Copernicus, or Conversations with God', etc.

Jan Matejko House is the mansion which saw the birth and the tragic end of this famous painter. He was born in the house, grew up to be established as one of the finest painters of Poland, after which he briefly left the building. However, during his final years, he returned and lived there until he finally bid adieu to the world. Renovated in 2007-09, the museum showcases the everyday life of Matejko. One can see the artist’s studio with his palette, brushes, painting tools, work desk, his drafts and sketches, paintings and even the bed he breathed his last. Matejko was not only a gifted painter; he was also a collector of interesting artifacts, so much of the house functions as a small museum.

The Wyspianski Museum takes you into the world of Stanislaw Wyspianski, where you are invited to take a closer look at some of his best works and their making. Located in the house of the Szołayski family, the building too, is one of the city’s monumental buildings in its own right. Dating back to the 14th century, the structure underwent several reconstructions and renovations in the 19th and 20th century. Roped in as a part of the National Museum of Krakow in 1904, it has been home to several exhibits and treasures of the city.

Off late, the Szolayski house is playing home to the most prized possession of the city’s recent past – the works of its beloved Stanislaw Wyspianski, along with collections from Feliks Manggha. One of Poland’s most cherished artist of the 19th century, Stanislaw Wyspianski was one of the pioneers who merged modern trends and styles of art with the Polish folksy touch. Unique in his every endeavour, Wyspianski’s was also unofficially tagged as the Fourth Polish Bard.

The museum displays a wide collection of Stanislaw’s sketches, paintings, furniture, documents, stained windows, pastels etc. Although Stanislaw died young, his work lives on as proof of the maestro that he was.
Image by Zygmunt Put on Wikimedia under Creative Commons License.
4

One of the most revered artists of the Art Nouveau era in Poland (a key figure of the so-called Young Poland movement), Jozef Mehoffer emerged as a painter in Krakow where he studied at the Academy of Fine Arts from 1887 to 1894.

An accomplished master of graphic art, crayon portraits, chalk drawings and etchings, he tried his hand in various techniques and media, but was particularly successful in decorative arts. Throughout his career, Mehoffer created multiple book covers and illustrations, title cards, ornaments, vignettes, initials, as well as posters, trademarks and banknotes. Also acclaimed for his stained glass and polychrome designs, Jozef Mehoffer rose to international fame by producing stained glass windows for the Gothic St. Nicholas church in Freiburg, Switzerland.

In 1932, the artist bought a house on Krupnicza Street which happened to be the birthplace of his colleague and friend Stanislaw Wyspianski. Previously, this property had left mark in the history of Krakow as a safe house for resistance activists during insurrections in the mid-19th century when Poland was partitioned between Germany, Austria and Russia.

Other than being purely biographical, the museum carries a great deal of weight in terms of artistic exhibition, featuring interior and other decorations, a number of sculptures, three stained glass windows, 120 oil paintings, drawings, designs of polychrome and stained glass windows, as well as Japanese woodcuts. A lion's share of the family memorabilia, furniture, iconography, photographs, a library and a collection of textiles have been provided by Jozef Mehoffer’s grandson Ryszard, who also helped with their arrangement. The exhibits fill up 16 rooms and reflect perfectly the atmosphere of the artist’s family house at the turn of the 20th century.
Image by AlbertHerring on Wikimedia under Creative Commons License.
5

Count Emeryk Hutten-Czapski, (born 17 October 1828 in Stankow near Minsk, died 23 July 1896 in Kraków) was a Vice-Governor of St Petersburg and an important collector of books, prints, and numismatics. He built his collection at his family estate in Stankow, today in Belarus. Fearing for the safety of the collection, being close to Russia, he moved the collection to Krakow. In 1894, he purchased a 19th-century palace, on what is today 12 Pilsudski Street, and built an addition to house his collection.

He died in 1896, before the addition was finished. His wife, Baroness Elzbieta Meyendorff, completed the construction of the addition, and in 1904, as per her husband's request, donated the collection to the city of Krakow.

The museum was reopened in 1917 and once again at the outset of World War II, in 1939, was closed and the collection was again safeguarded. Since 1939 the museum remained closed to the public for 70 years. With funding from the European Union, the museum and gardens were restored and opened once again to the public in 2013.