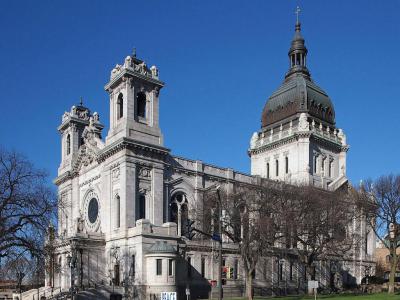 The Basilica of Saint Mary is a Roman Catholic minor basilica located on its own city block along Hennepin Avenue between 16th & 17th Streets in downtown Minneapolis. It was the first basilica established in the United States. The Basilica of Saint Mary is the Co-cathedral of the Roman Catholic Archdiocese of Saint Paul and Minneapolis and is one of the finest examples of Beaux-Arts architecture in the country.

The Basilica of Saint Mary replaced a previous church, the Church of the Immaculate Conception. The building was added to the National Register of Historic Places in 1975. Its significance is due to three reasons: its excellent architecture and engineering design, as an expression of Baroque influence in church architecture; an example of the history of religious movements in Minnesota; and its place as the first basilica in the United States.

The foundation of the church is of Rockville granite. The walls are built of white Vermont granite, with a height of 70 feet from the floor to the eave-line. The main entrance is a colonnaded portico with two 116-foot spires on each side. The nave is lighted by five large arched stained glass windows. The nave has a barrel vault of 82 feet, exceeding that of the St. Peter's Basilica by two feet. The sanctuary, at the north end of the nave, is topped with a grand dome measuring 40 feet square at the base and rising 138 feet above the floor.
Image Courtesy of Wikimedia and McGhiever.
Sight description based on Wikipedia.