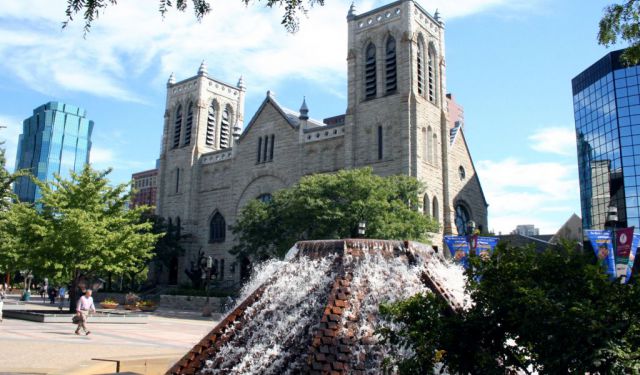 Minneapolis is known as the "City of Lakes”, but lakes aren’t the only pride of this city. You will be amazed by how many cathedrals, churches, temples and other holy places are scattered among the city. Don’t miss the chance to visit the most notable historical churches in Minneapolis with this self-guided walking tour.
Image Courtesy of Wikimedia and Jim Winstead Jr.
How it works: Download the app "GPSmyCity: Walks in 1K+ Cities" from iTunes App Store or Google Play to your mobile phone or tablet. The app turns your mobile device into a personal tour guide and its built-in GPS navigation functions guide you from one tour stop to next. The app works offline, so no data plan is needed when traveling abroad.

The Basilica of Saint Mary is a Roman Catholic minor basilica located on its own city block along Hennepin Avenue between 16th & 17th Streets in downtown Minneapolis. It was the first basilica established in the United States. The Basilica of Saint Mary is the Co-cathedral of the Roman Catholic Archdiocese of Saint Paul and Minneapolis and is one of the finest examples of Beaux-Arts architecture in the country.

The Basilica of Saint Mary replaced a previous church, the Church of the Immaculate Conception. The building was added to the National Register of Historic Places in 1975. Its significance is due to three reasons: its excellent architecture and engineering design, as an expression of Baroque influence in church architecture; an example of the history of religious movements in Minnesota; and its place as the first basilica in the United States.

The foundation of the church is of Rockville granite. The walls are built of white Vermont granite, with a height of 70 feet from the floor to the eave-line. The main entrance is a colonnaded portico with two 116-foot spires on each side. The nave is lighted by five large arched stained glass windows. The nave has a barrel vault of 82 feet, exceeding that of the St. Peter's Basilica by two feet. The sanctuary, at the north end of the nave, is topped with a grand dome measuring 40 feet square at the base and rising 138 feet above the floor.

Image Courtesy of Wikimedia and McGhiever.
Sight description based on Wikipedia.
2

Saint Mark's Episcopal Cathedral in Minneapolis, is one of two cathedrals in the Episcopal Diocese of Minnesota. It was built as a parish church overlooking Loring Park in 1910. In 1941, it was designated a cathedral when the bishop's office moved to Minneapolis from the Cathedral of Our Merciful Saviour in Faribault.

The cathedral hosted the first World Congress of the Anglican Communion to be held outside of the United Kingdom in 1954, and hosted the 1976 General Convention in Minneapolis which officially accepted the ordination of women as priests and adopted the current Book of Common Prayer used in the United States. In 2003, St. Mark's hosted the General Convention at which the election of Rt. Rev. V. Gene Robinson as Bishop of the Diocese of New Hampshire was confirmed, making him the Episcopal Church's first openly gay, noncelibate bishop.

In 2007, following the collapse of the Interstate 35W bridge in Minneapolis, St. Mark's hosted an interfaith service of healing. On June 1, 2008, St. Mark's celebrated their 150th anniversary as a parish church with a celebratory mass. There is a Biblical garden on the cathedral grounds. Composer Stanley R. Avery was choirmaster and organist at St. Mark's Church from 1910 to 1950.

Image Courtesy of Wikimedia and Jonathunder.
Sight description based on Wikipedia.
3

The Wesley United Methodist Church (formerly the Wesley Methodist Episcopal Church) building was constructed of granite, stone, brick, and sandstone in Richardsonian Romanesque style, featuring round-arched windows and multiple towers. When built, the building was in the residential neighborhood of Loring Park at 101 Grant Street East; it was built during Minneapolis' building boom in the last decade of the 19th century. Architect Warren H. Hayes (1847-1899) was Minneapolis' leading designer of churches in the 19th century, having designed the Calvary Baptist Church, Fowler Methodist Episcopal Church, and the First Congregational Church, as well as the Central Presbyterian Church in Saint Paul. Today, the location is overwhelmed by the neighboring Minneapolis Convention Center.

The church was renamed Wesley United Methodist Church when the Methodist Episcopal Church and Evangelical United Brethren Church merged in 1968. The Preservation Alliance of Minnesota listed it on its 2010 10 Most Endangered Historic Places list.
Image Courtesy of Wikimedia and McGhiever.
Sight description based on Wikipedia.
4

Westminster Presbyterian Church is located downtown. Since its foundation, the location of this church has changed 3 times. It has been in existence for more than 140 years. It was built in 1860, but it soon outgrew its capacity so it began construction of another church in 1883. The new one was larger than the previous, but after 12 years it was destroyed by a fire. The church was removed, and the construction of the new one was finished in 1897. In 1998 the sanctuary underwent restoration, and by the end of 1998, the renovated sanctuary had opened its doors for all.
Image Courtesy of Wikimedia and Jason Riedy.
Sight description based on Wikipedia.
5

Central Lutheran Church is located in the heart of the city. Its foundation was influenced in 1917 by a small group of people who wanted to create a Lutheran church that would provide worship services in English. The members of the church always welcome people to share their faith here. This sanctuary represents a perfect model of the Lutheran church of the twenty-first century. Their vision requires its believers always to learn, change and grow. Worship services take place on Sundays, but this church keeps its doors open every day.
Image Courtesy of Wikimedia and Farragutful.
6

Gethsemane Episcopal Church is an historic church listed on the National Register of Historic Places. It is one of the oldest extant churches in Minneapolis and is significant for its Gothic Revival architecture.

Architect Edward Stebbins modeled the church on small Gothic style churches in rural England. It is proportioned rather broadly, as opposed having tall proportions, which is rather unusual for churches designed in the late 19th century. The area surrounding the church was primarily residential when it was first built, but it is now surrounded by commercial development.
Image Courtesy of Wikimedia and McGhiever.
Sight description based on Wikipedia.