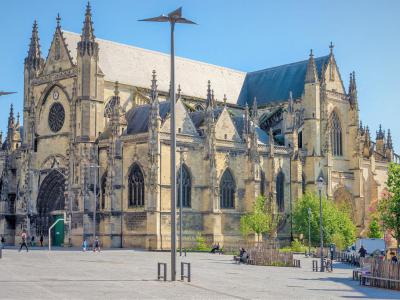 The Basilica of Saint-Michel is a Catholic church located on Place Canteloup, a historic square close to the Pont de Pierre bridge. It was built at the turn of the 15th century in the Gothic Flamboyant style. A highly unusual design, it features a cruciform church building and a separate bell tower. The tower, which tapers to form an elegant, ornately decorated spire, is 114 meters tall and was built after the church building, sometime in the 15th century. It makes the Basilica of Saint-Michel the city’s tallest building, and the second tallest church in all of France.

The dizzying height of the tower makes it visible across much of Bordeaux, a flat city with relatively few tall buildings. It is worthwhile heading towards this landmark wherever you are in the city, as the church itself houses a number of interesting artifacts. The church pulpit depicts St Michael slaying a dragon, whilst the central stained glass window was designed by Couturat. Beneath the church lies a cemetery and catacombs from the city’s Roman era, which lay undiscovered until 1881.

Why You Should Visit:
A gothic extravaganza on the outside, standing clear in the square. Easy to walk around and view from all angles.
Inside is typical except for the marvelous 20th-century windows, some of the best modern stained-glass in Europe.
One of the chapels is given over to information both on the glass in the basilica and on the 'modern masters'.

Tip:
Sit outside by night in one of the many coffee/wine bars in the square and enjoy the view!