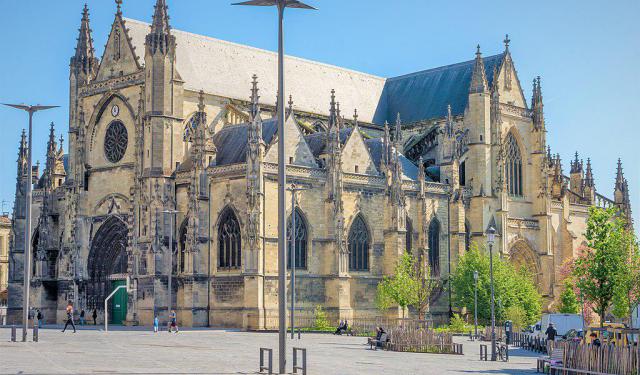 Once dubbed La Belle au Bois Dormant (‘Sleeping Beauty’), Bordeaux owes its nickname in large part to the impossibly beautiful religious buildings. With the concentration of historic churches, cathedrals and temples found in the city, it's no wonder that half of Bordeaux is a UNESCO-listed Heritage Site. If you're keen on Christian architecture and would like to appreciate the skillfully done stonework of Cathédrale St. André, Basilicas of St. Michel, St. Seurin and other prominent places of worship in Bordeaux, take this self-guided walking tour.
Image Courtesy of Wikimedia and Jean-Christophe BENOIST.
How it works: Download the app "GPSmyCity: Walks in 1K+ Cities" from iTunes App Store or Google Play to your mobile phone or tablet. The app turns your mobile device into a personal tour guide and its built-in GPS navigation functions guide you from one tour stop to next. The app works offline, so no data plan is needed when traveling abroad.

The Basilique Saint-Seurin stands on the edge of a public park, close to Place des Martyrs de la Resistance. Whilst its address recalls the modern history of France, the church itself is one of the city’s oldest buildings. Extended and renovated through the ages, the crypt dates back to the 6th century – almost to the origins of Christianity. It was first constructed in the age following the Roman Empire when Christian groups fought for control of France. One such group, the Merovingians, took control of much of Western France, including Bordeaux. They believed that they possessed a direct bloodline to Jesus Christ. The marble tombs of many Merovingians can be seen in the ancient crypt.

The Basilique Saint-Seurin is a UNESCO listed World Heritage Site and one of Bordeaux’s most historic buildings. Romanesque in origin, it has had many Gothic elements added through the years. Chapels from the 11th and 14th centuries are housed within the nave. In the 15th century, extensive Gothic ornamentation, including sculptures and keystones, were added to the church interior. The church and crypt are both free to visit.

Why You Should Visit:
The architecture is a treat to explore with the Romanesque intact.
The stained-glass windows are spectacular, largely 19th century.
The crypt is a surprise with exceptional 6th-century sarcophagi & original chapels.

Tip:
Outside there is a very interesting archaeological site to explore.


Image Courtesy of Wikimedia and Akiramifune.
Sight description based on Wikipedia.
2

2) Eglise Notre-Dame (Church of Our Lady)

The Église Notre-Dame is an 11th-century Gothic church located at Rue Mably in the northern quarter of the city center. One of the city’s most popular buildings, its facade as well as its name bring to mind the more famous Notre Dame church, found in the center of Paris. Built by Pierre Duplessy, a renowned architect and town planner in the late 17th century, the church is a listed historical monument.

The church’s patron saint is St. Dominic; his figure is carved into the ornate facade of the building, receiving a rosary from the Virgin Mary. The church was founded after Dominican Catholics were moved from their convent in 1678, in order for King Louis XIV to expand his palace. Due to a dispute with neighboring buildings as they searched for free land in a growing city, the church was forced into building a place of worship that faced east rather than west.

The interior of the Église Notre-Dame is known for its ornate Gothic style decoration. The church holds regular mass, and visitors at any time will find locals and tourists alike kneeling in prayer in a building still known for its tranquility, despite consistently high tourist numbers.

Why You Should Visit:
The 19th-century paintings on the walls inside are interesting, the large organ and stained glass are quite impressive, but it is the façade, facing into a small, quiet square, that is the real star.

Tip:
Try to visit during the start of service – no one bothers you and you can stand at the side where the ancient baptismal fountain and chapels are.
Next door is the Cour Mably which used to be the cloister for Notre-Dame and is now a venue for temporary exhibitions but still worth a look, partly in its own right but also because you get a good view of the church tower from within the cloister.

Église Saint-Pierre, or the Church of St. Peter, is a Medieval church situated in the heart of Old Bordeaux. Like many French churches from the 14th and 15th centuries, the Saint-Pierre is notable for its quirky, flamboyant Gothic architecture, particular an unusual single square bell tower on the left-hand side as you approach, giving the building a lopsided quality. The church’s interior is well known for drawing together architectural highlights from through the ages. An ornate Gothic portal stands next to a brilliant white 17th-century pieta, which illuminates the inner walls of the church.

The church is surrounded by an elegant square, the Place Saint-Pierre. Together they form the heart of this ancient district of Bordeaux, also named after St Peter. A bustling area of the city, from medieval times, it was largely destroyed in the 18th century. The narrow streets built in the medieval district’s place carry a timeless quality, each lined with similar, well-preserved townhouses. Look out for the peculiar faces on many of the house facades. Known as ‘mascarons’, they were a symbol of wealth for the homeowner.

Why You Should Visit:
Undeniably pretty with some unusual adornments externally. Also, as many have observed, it's very peaceful.
Sits in a shady, tranquil, small square that makes you feel you're in the middle of a small town rather than a busy city.

Opening Hours:
Daily: 8am-6pm, except Sundays when services are held between 8am and 12pm.
Image Courtesy of Wikimedia and Luidger.
Sight description based on Wikipedia.
4

The Saint-André Cathedral, often known simply as Bordeaux Cathedral, is located at Place Bey Berland in the heart of Bordeaux city center. The Roman Catholic Cathedral of Saint-André was consecrated in 1096 by Pope Urban II; however, only a wall within the nave remains of the original Romanesque structure. The majority of the building has survived from the 14th & 15th centuries. The cathedral’s famous Royal Gate dates to the early 13th century. The entire building, including the separate bell tower, the Tour Pey Berland, is listed as a French national monument.

The cathedral has played its part in the history of Bordeaux. In 1137, 13 year old Eleanor of Aquitaine, one of the region’s most famous historical figures, married Prince Louis VII in the cathedral. Within a few months, they became King & Queen of France, but their marriage was annulled in 1152. Eleanor went on to marry Henry II, a future king of England, and became Queen of England, and mother of King Richard the Lionheart and King John of England.

The cathedral boasts two Gothic towers above the main entrance, in addition to the vertiginous bell tower directly adjacent to the main building. Still an active place of worship, it holds mass each Sunday and is still the seat of the Archbishop of Bordeaux-Bazas – a position once held by Pey Berland, after whom the bell tower and surrounding square are named.

Why You Should Visit:
French cathedrals have grandeur & splendor in abundance, and this one is top of the pile, with well-preserved interior decoration and design.
The bell tower, which stands separate from the cathedral, is also worth pointing out as the views from the top are worth the effort of the climb up.

Tip:
There is no entry fee, but they do take donations.
If you walk in, make sure you look to the right, to the back and admire the giant organ pipes.
To appreciate the cathedral from a different perspective, climb the Pey Berland tower nearby.

The Basilica of Saint-Michel is a Catholic church located on Place Canteloup, a historic square close to the Pont de Pierre bridge. It was built at the turn of the 15th century in the Gothic Flamboyant style. A highly unusual design, it features a cruciform church building and a separate bell tower. The tower, which tapers to form an elegant, ornately decorated spire, is 114 meters tall and was built after the church building, sometime in the 15th century. It makes the Basilica of Saint-Michel the city’s tallest building, and the second tallest church in all of France.

The dizzying height of the tower makes it visible across much of Bordeaux, a flat city with relatively few tall buildings. It is worthwhile heading towards this landmark wherever you are in the city, as the church itself houses a number of interesting artifacts. The church pulpit depicts St Michael slaying a dragon, whilst the central stained glass window was designed by Couturat. Beneath the church lies a cemetery and catacombs from the city’s Roman era, which lay undiscovered until 1881.

Why You Should Visit:
A gothic extravaganza on the outside, standing clear in the square. Easy to walk around and view from all angles.
Inside is typical except for the marvelous 20th-century windows, some of the best modern stained-glass in Europe.
One of the chapels is given over to information both on the glass in the basilica and on the 'modern masters'.

Tip:
Sit outside by night in one of the many coffee/wine bars in the square and enjoy the view!