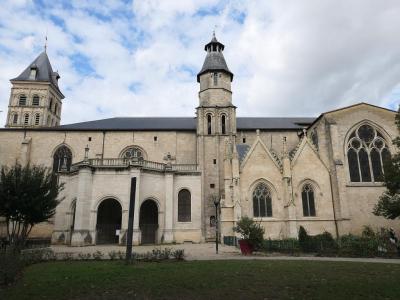 The Basilique Saint-Seurin stands on the edge of a public park, close to Place des Martyrs de la Resistance. Whilst its address recalls the modern history of France, the church itself is one of the city’s oldest buildings. Extended and renovated through the ages, the crypt dates back to the 6th century – almost to the origins of Christianity. It was first constructed in the age following the Roman Empire when Christian groups fought for control of France. One such group, the Merovingians, took control of much of Western France, including Bordeaux. They believed that they possessed a direct bloodline to Jesus Christ. The marble tombs of many Merovingians can be seen in the ancient crypt.

The Basilique Saint-Seurin is a UNESCO listed World Heritage Site and one of Bordeaux’s most historic buildings. Romanesque in origin, it has had many Gothic elements added through the years. Chapels from the 11th and 14th centuries are housed within the nave. In the 15th century, extensive Gothic ornamentation, including sculptures and keystones, were added to the church interior. The church and crypt are both free to visit.

Why You Should Visit:
The architecture is a treat to explore with the Romanesque intact.
The stained-glass windows are spectacular, largely 19th century.
The crypt is a surprise with exceptional 6th-century sarcophagi & original chapels.

Tip:
Outside there is a very interesting archaeological site to explore.