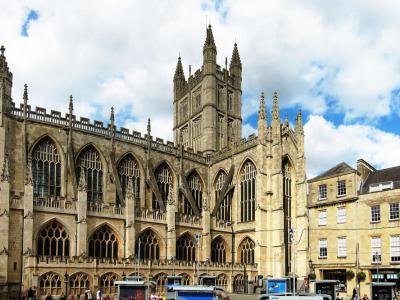 The Abbey here was founded in the 7th century and reorganized and rebuilt several times over the centuries. It began as a convent and later became a monastery. Then it was a cathedral with a bishop until it became a parish church in 1539. The current building was begun in 1499, making it the last great medieval church in England. King Edgar the Peaceful was crowned here in 973.

It's a stunning example of Gothic cathedral architecture. The cruciform layout has seating for 1,200. The trademark fan vaulting was added in the 1860s as part of ongoing works to complete the Abbey's original design intention.

The Abbey is a gorgeous historic building that is worth seeing in its own right. The church is 225 feet long and 80 feet wide.

Keep an eye out for the 635 various memorials on the walls throughout the Abbey.

You can spend a few minutes or an hour and more exploring the Abbey. If you only have 15 minutes, you can take a quick walk, admire the windows and carved angels, and see the fan vaulted ceilings. If you have time for a more extended tour, you can spend more time reading the memorials or reflect or pray in the chapels.

Keep an ear open for the impressive Klais Organ that is played every Sunday and for regular recitals. Organs have been played in the Abbey since 1634, though the current model is newer. The organ was entirely rebuilt by Klais in 1997, using many parts from historical instruments in the building.

Look for the sculpture on the west side of Jacob's Ladder, complete with angels climbing to heaven.
Image by Velvet on Wikimedia under Creative Commons License.