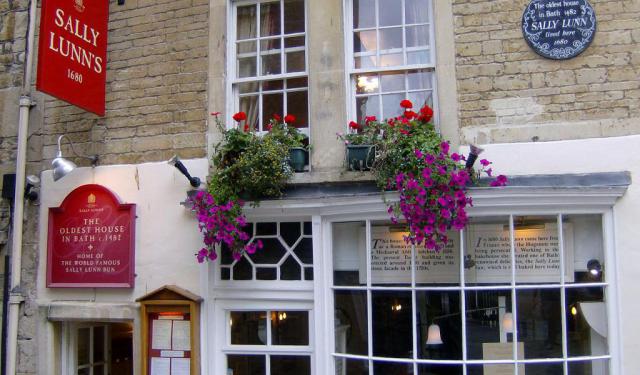 While in Bath, why not visit the homes of some of the city's prominent residents of the past and discover how people used to live here, back in the day. Among the most famous of them, undoubtedly, is the Jane Austen Centre – ideal for a snapshot of what life was like in Regency times. You may also want to stop by William Herschel's home to find out how the astronomer discovered the planet Uranus, or drop in at Sally Lunn's Historic Eating House to get a taste of the famous Sally Lunn's bun, or, perhaps, have a look at the former residence of the Commander-in-Chief of the British Armed Forces in the early 1700s. If all of this sounds like a good idea for a highlight of your Bath trip, take this self-guided walk!
Image Courtesy of Fahdshariff.
How it works: Download the app "GPSmyCity: Walks in 1K+ Cities" from iTunes App Store or Google Play to your mobile phone or tablet. The app turns your mobile device into a personal tour guide and its built-in GPS navigation functions guide you from one tour stop to next. The app works offline, so no data plan is needed when traveling abroad.

Nothing typifies Regency life in Bath so much as a classic Jane Austen novel. The world-renown author lived in Bath from 1801 to 1806. Two of her novels, Northanger Abbey and Persuasion, were set here. So it's no surprise that in Bath you will find the Jane Austen Centre. Nestled in a Georgian house near the imposing Bath Abbey, The Circus, and the Roman Baths, this museum aims to share the wonders of Austen's Georgian-era Bath with the world.

The Centre has actors in Regency costume to create an immersive experience. There is a carefully crafted, waxwork statue of Jane. The waxwork often surprises visitors as it stands at 5'8", quite tall for a Georgian lady. Forensic artists spent over three years creating the sculpture. There is only one likeness of Jane Austen; a portrait drawn by her sister, Cassandra. However, other family members criticized the portrait and felt it did not capture the true Jane Austen. See for yourself whether or not the sculpture matches your expectations. You'll also find a gift shop and a tea room operated by the Centre.

Ardent Jane Austen fans will need no encouragement to stop at the Jane Austen Centre. But the Centre is designed as an immersive experience for the whole family, with guides in period costumes add to the charm. Learn about Bath's history, especially about Regency-era life and customs.

The building itself, part of a block on Gay Street, is an English Heritage Grade II listed building.

The Centre organizes Bath's Jane Austen Festival every year in September. The ten-day celebration features over 80 events, including a summer ball, a costumed promenade, and a masquerade ball.

Do not miss the Centre's Regency Tea Room, which has been awarded the Tea Guild's Award of Excellence. If you've visited the Centre, you get 10 percent off at the Tea Room.

2) Herschel Museum of Astronomy (must see)

The Herschel Museum of Astronomy is located at 19 New King Street, the former home of astronomers William and Caroline Herschel. Situated on a quiet side street close to the bustling Seven Dials area of Bath, the Herschel Museum is housed entirely within a compact Georgian townhouse. The Herschels lived in the house for five years in the 18th century. In that short time, William Herschel discovered the planet of Uranus through a telescope that can be seen inside the museum. The museum houses a number of other historical artefacts, including many items of apparatus that the Herschels used to map the stars.

The museum is split over three floors within the house, with an ornamental garden attached, and a cinema within the vaults that shows documentaries on astronomical discoveries. There is a virtual tour available on the ground floor for wheelchair users. The museum’s patron is British astronomer Sir Patrick Moore, and the site is managed by the Bath Preservation Trust. It is open on weekday afternoons until 5pm (except Wednesdays) and from 11am to 5pm on weekends. The museum closes for several weeks either side of the Christmas period, but is open throughout the rest of the year.

Inside one of the oldest houses in Bath, you will find some delectable treats. As the story goes, Sally Lunn was a French immigrant who arrived in Bath in 1680 and established this bakery. The house was built around 1482, but the masonry oven and other elements on the ground floor date from around 1137.

The lower level of the home hosts a museum where you can tour the original kitchen. The house still serves food based on their trademark recipe, the "Sally Lunn Bunn." In the evening, they serve fine English food, including some spectacular pies.

But all is not as it seems at Sally Lunn's Historic Eating House. While the food is excellent, and the house is very old indeed, there is little historical evidence of one Sally Lunn, or Solange Lyon, as the story goes. The building was purchased in the 1930s by the enterprising Marie Byng-Johnson, who opened a tearoom and claimed to subsequently discover an "ancient document" that told Madamoiselle Lunn's story. The "Sally Lunn Bunn" moniker had already long been used to describe the sweet teacake throughout Britain.

Regardless of the details, Sally Lunn Bunns are an iconic Bath original. There's no better place in town to take tea, and there's no better accompaniment than the original teacake. Savory or sweet, with tea or coffee, you can't go wrong. Just don't forget the clotted cream.
Image Courtesy of Fahdshariff.
4

Marshal Wade's House at 14 Abbey Church Yard, was built around 1700 and has been designated as a Grade I listed building. The building was originally attributed to Lord Burlington and was thought to have been built in 1730. However, it is now believed to have been an earlier construction, built for George Wade who was a Field Marshal and served as a British military commander and Commander-in-Chief of the Forces, as well as a Member of Parliament for Bath from 1722 to 1747.

The Palladian nature of the architecture is emphasised by the 5 fluted Ionic pilasters on the 1st and 2nd floors. The shop on the ground floor was an early 19th century development which is now occupied by the National Trust. The house was acquired by the Landmark Trust in 1975, who have carried out a renovation and now let out the property.
Image Courtesy of Wikimedia and Brian Robert Marshall.
Sight description based on Wikipedia.