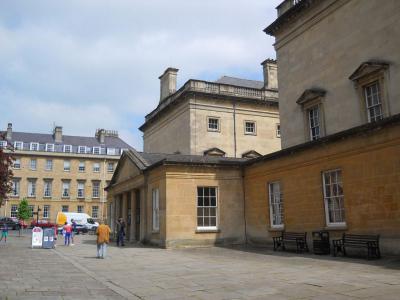 Today, you can still visit the Upper Rooms and glory in their beauty. Don't miss the original Wayfarers crystal chandeliers. The Fashion Museum is also located in the Assembly Rooms and is well worth a visit. Be sure to admire all the Regency era dresses.

In Northanger Abbey, Catherine Morland often visits both the Upper Rooms and the Lower Rooms and dances the nights away in crowded rooms. Catherine Morland met Henry Tilney in the Lower Rooms, and Henry Tilney found the Master of Ceremonies to introduce them. Isabella Thorpe was affronted when James Morland asks for more dances without changing partners. These vignettes give insight into the different, more restrictive social norms of Regency England.
Image Courtesy of Wikimedia and shrinkin'violet.