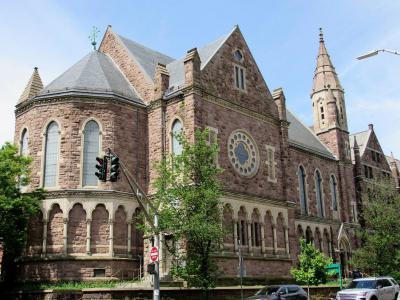 Battell Chapel is the largest chapel of Yale University in New Haven. Built in 1874–76, it was funded primarily with gifts from Joseph Battell and other members of his family. The chapel is in High Victorian Gothic style of rough brown sandstone. It was the third of Yale's chapels and provided space for daily services, which were mandatory for Yale College students until 1926.

Together with Durfee Hall and Farnam Hall, the chapel was part of a program begun in the 1870s to build up the perimeter of Old Campus and separate it from the rest of the city. These three buildings, all by the same architect, were among the first at Yale to be named for donors rather than function, location, or legislative funding.

The Battell Chapel clock, with chimes consisting of five large bells that rang at each quarter hour, was at one time the clock to which others at Yale was synchronized; however, the chimes have been silent for years.

*** Amistad Freedom Trail ***
The Chapel symbolizes the role of the Yale Divinity School faculty and students played in helping the Mende Africans of La Amistad, and houses a themed exhibition maintained by Yale.
Image Courtesy of Wikimedia and Farragutful.
Sight description based on Wikipedia.