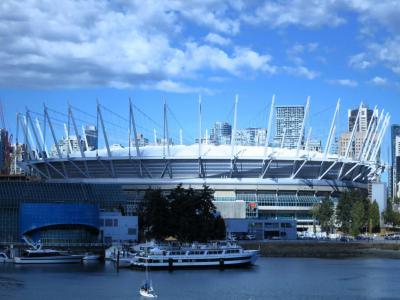 The BC Place Stadium currently serves as the home for the BC Lions Canadian football team and Vancouver Whitecaps Major League Soccer team, and houses the BC Sports Hall of Fame. In the past, it served as the Olympic stadium for the 2010 Winter Olympics, was an eight time host for the Canadian Football League's Grey Cup, and was the venue at which Pope John Paul II gave an address as part of the papal visit to the Archdiocese of Vancouver.

Michael Jackson performed several concerts with his brothers in BC Place Stadium during 1984, to a packed house every night. Later, in 2008, Madonna gave her first Vancouver performance at the venue as part of her Sticky & Sweet Tour. The arena hosts over 200 events each year, including trade shows, expos, concerts, community events, and motor sports. Fans of just about any kind of sport wouldn't want to miss a chance to visit the BC Place Arena, much as to take a tour of the BC Sports Hall of Fame.
Image Courtesy of Flickr and Ruth Hartnup.
Sight description based on Wikipedia.