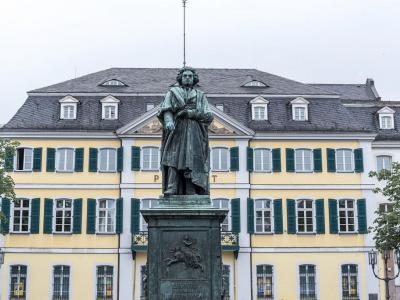 The Beethoven Monument is the most popular and important monument of Ludwig van Beethoven in Bonn. The monument was open to the public in August, 1845, when the city ceebrated the grand musician's seventy-fifth anniversary. The idea of creating a monument for Beethoven belonged to Franz Liszt, another famed musician. He contributed financially to the development of the landmark and composed the "Cantata for the inauguration of the Beethoven Monument". The bronze monument was the creation of Ernst Julius Hähnel, a talented sculptor. The base on which the Beethoven monument is situated is decorated with four symbols representing instrumental, opera, spiritual and symphonic music.
Image by M_WalzEriksson on Flickr under Creative Commons License.

Want to visit this sight? Check out these Self-Guided Walking Tours in Bonn. Alternatively, you can download the mobile app "GPSmyCity: Walks in 1K+ Cities" from iTunes App Store or Google Play. The app turns your mobile device to a personal tour guide and it works offline, so no data plan is needed when traveling abroad.