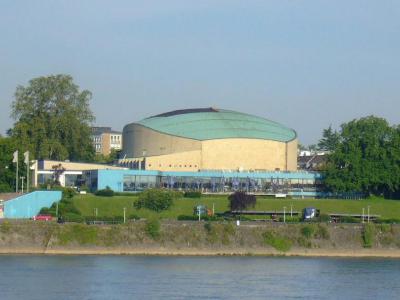 The Beethovenhalle is a concert hall in Bonn. It is the third hall in that city to bear the name of Bonn-born composer Ludwig van Beethoven. The first Beethovenhalle was built in 1845 during the inauguration of the Beethoven Monument, located in the Münsterplatz, the second hall was built in 1870 for centennial celebration of Beethoven's birth. Construction began anew on the hall after its destruction during Second World War. The third Beethovenhalle was designed and built under the direction of the German architect Siegfried Wolske. In September 1959 it was completed and has since then been an emblem of the city and one of the most important buildings of contemporary Germany. As the former halls, it is characterized by an excellent acoustic. In this context it has to be mentioned that the Beethovenhalle is highly important for the preservation of Beethoven’s musical tradition.

Furthermore it is the home of the Beethoven Orchester Bonn. The opening and the final concert of the Beethovenfest takes place in the large hall, which offers seats for about 2000 concert guests. Prominent artists from around the world perform in the Beethovenhalle. In addition to that the hall is further used for carnival-events, exhibitions, parties, celebrations, conferences and conventions.

Bonn, beside having an incredible variety of attractions for grown-ups, offers an accordant number and selection of places to visit for children of all ages and personalities. The attractions will offer kids not only positive impressions, but will also provide them with much useful information. Take the present guided tour to give your children a day full of pleasant memories to take back home.