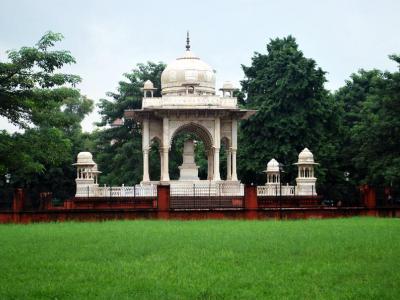 Begum Hazrat Mahal Park is located in the heart of the city and pays the tribute to Nawab Wajid Ali Shah’s first wife. She was very beautiful and courageous, and had great leadership qualities. She stood up against the British East India Company during the Indian Rebellion of 1857. When her husband was sent into exile to Calcutta, she seized control of Lucknow, took charge of the affairs of the state of Awadh and placed her son, Prince Birjis Qadir, as its ruler, but was compelled to give it up. She refused allowance and status from the British. Subsequently, she found asylum in Nepal where she lived until the end of her life.

On 15 August 1962, Begum Hazrat Mahal received special recognition at a ceremony in the old Victoria Park where a marble memorial was open by the state Government in her memory, for she played a an important role during the first freedom movement in 1857. This memorial was embellished with colorful flowers, light bulbs and neon tubes. A marble tablet with four round brass plaques holds up the coat of arms of the Awadh royal family.

Begum Hazrat Mahal Park has hosted many Dusshera festivals when Ravan (the bad character in Hindu Sanskrit) is set on fire as a symbol of good triumphing over evil. Also, numerous Lucknow Mahotsavs have been organized here. These festivals are meant to showcase the art and culture of the Uttar Pradesh state and to promote tourism in the area. The park is a very green and beautiful landscape. Scores of people walk through it in the mornings, and many more find delight visiting the Park in the evenings when the fountains go up and the lights are turned on.