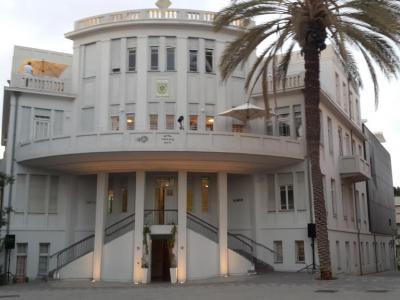 Constructed in 1925 and initially destined to be a hotel, this architectural pearl in the picturesque Bialik Square has served various purposes, but is more widely known as the house of the first Mayor of Tel Aviv, Meir Dizengoff ("Beit Ha'ir" literally means "the town's home"). With shows and events mostly during holidays, it contains (and is ideal for) permanent displays about the city's history, culture and architecture while also acting a stage for local and international artists, creators and intellectuals to showcase their works.

The museum traces the city's history from when the first Jews (66 families) arrived on 11 April 1909, and through following decades of urban development, so check out the interactive timeline display to gain some historical insight. Among other things, there are pictures from family albums, culled from tens of thousands sent in by people who live – or once lived – in Tel Aviv, and a fabulous collection of colorful tiles taken from floors of the city's earliest dwellings. Take the elevator – or winding stairs – up to the Dizengoff Room, restored just as it was when used as the official office of the first mayor – and with a great view of the city!