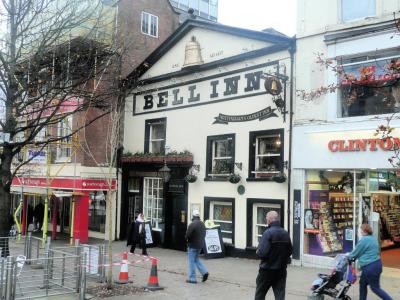 A medieval proverb claimed that if the abbot of Glastonbury married the Abbess of Shaftsbury, they would have more land than the King. Apparently, this was true. Henry VIII was enraged. The clergy had more money than he did. Much more. To fatten the royal purse, Henry sacked almost all monasteries, priories, and nunneries in England.

The Whitefriars Priory of Nottingham was spared. As a refectory built around 1420, it made a great alehouse in 1539. Henry may have disliked friars, but he didn't mind ale. An Angelous bell hung outside the building, so it was named "The Bell Inn." Ye Olde Trip to Jerusalem and Ye Olde Salutation Inn and the Bell Inn are the oldest pubs in town.

The pub main entrance leads to the Snack Bar in the old flagstoned stables. There are the leprosy windows in the entranceway where customers had their fingers counted before entering. The Tudor Room bar and Lizzie's Bar date from 1437. The upper floor houses The Belfry restaurant and The Crown Post Room. The Belfry is also used for private functions.

The honeycomb of caves beneath the Inn date back to Norman times. There are two old wells and a network of blind tunnels going in all directions. Tours of the caves can be arranged, but watch your step and ask about hardhats.
Image Courtesy of Flickr and Reading Tom.

Want to visit this sight? Check out these Self-Guided Walking Tours in Nottingham. Alternatively, you can download the mobile app "GPSmyCity: Walks in 1K+ Cities" from iTunes App Store or Google Play. The app turns your mobile device to a personal tour guide and it works offline, so no data plan is needed when traveling abroad.

Nottingham is home to buildings of varying architectural styles that present a mixture of designs and make Nottingham a city full of contrasts. One of the city's most renowned architects, who contributed to the creation of many of Nottingham's picturesque buildings, was Watson Fothergill. Take this self-guided walking tour to view some of this master architect's work, as well as...  view more

There's hardly anyone on this planet who hasn't heard of Robin Hood. Apparently, a Saxon nobleman born in 1160 in Loxley, this hero of numerous ballads, some dating back as far as the 14th century, earned fame by robbing from the rich and giving it back to the poor. A skilled archer and sword fighter as he was, Robin Hood famously defended villagers from attacks by corrupt noblemen,...  view more

Nottingham was known only as "The Place of Caves" in 600 AD. A Saxon chief named Snot ruled "Snotingaham", or, "the home of Snot's people." It was part of Danelaw in the 7th century, administered from a stone Hall on High Pavement, the first street of Nottingham.