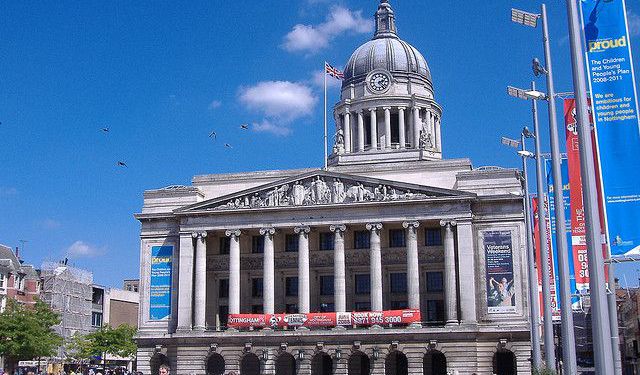 Nottingham is home to buildings of varying architectural styles that present a mixture of designs and make Nottingham a city full of contrasts. One of the city's most renowned architects, who contributed to the creation of many of Nottingham's picturesque buildings, was Watson Fothergill. Take this self-guided walking tour to view some of this master architect's work, as well as many other beautiful and historic buildings in Nottingham.
Image Courtesy of Flickr and mattbuck4950.
How it works: Download the app "GPSmyCity: Walks in 1K+ Cities" from iTunes App Store or Google Play to your mobile phone or tablet. The app turns your mobile device into a personal tour guide and its built-in GPS navigation functions guide you from one tour stop to next. The app works offline, so no data plan is needed when traveling abroad.

A medieval proverb claimed that if the abbot of Glastonbury married the Abbess of Shaftsbury, they would have more land than the King. Apparently, this was true. Henry VIII was enraged. The clergy had more money than he did. Much more. To fatten the royal purse, Henry sacked almost all monasteries, priories, and nunneries in England.

The Whitefriars Priory of Nottingham was spared. As a refectory built around 1420, it made a great alehouse in 1539. Henry may have disliked friars, but he didn't mind ale. An Angelous bell hung outside the building, so it was named "The Bell Inn." Ye Olde Trip to Jerusalem and Ye Olde Salutation Inn and the Bell Inn are the oldest pubs in town.

The pub main entrance leads to the Snack Bar in the old flagstoned stables. There are the leprosy windows in the entranceway where customers had their fingers counted before entering. The Tudor Room bar and Lizzie's Bar date from 1437. The upper floor houses The Belfry restaurant and The Crown Post Room. The Belfry is also used for private functions.

The honeycomb of caves beneath the Inn date back to Norman times. There are two old wells and a network of blind tunnels going in all directions. Tours of the caves can be arranged, but watch your step and ask about hardhats.

The Adams Building was built in 1855 as a lace finisher's warehouse and salesroom. It is located in the Lace Market section of Nottingham. It absorbed an earlier structure built in 1800. Additions and alterations were made through the 1800s. In 1999 it became part of the city campus of Nottingham College.

The Adams Building was designed by architect Thomas Chambers Hine. It was named for owner Thomas Adams, a leading industrialist of the day. The main building and its additions are of the same style. They are constructed of red brick and ashlar facings. Overall, it is Italianate. It has up to five stories with rear ranges around two inside courtyards.

Thomas Adams was a dedicated philanthropist. He provided a chapel with a chaplain in the lower floor. There were sanitary facilities and wash rooms, a tea room, savings bank and library.

The Lace Market is reputed to be the oldest section of Nottingham. Some might doubt that but the many ancient cave dwellings in the area lend some credence to the theory. The Lace Market got its name from the lace industry there that once made the city flourish.

It was never a market in the public sense but rather a place that handled wholesaling and promotion of lace industry products. The Adams Building marked the heyday of the lace industry in Nottingham. With the coming of the 20th century the industry declined.

The Lace Market today is an area of students, digital industries and small businesses. There may have been sweeping changes in the residents in the area, some of the old buildings and all of the caves remain.
Image Courtesy of Wikimedia and Alan Murray-Rust.
3

3) The Offices of Watson Fothergill

Watson Fothergill was a great British architect who devoted his life to his craft. He designed his own offices, which are located on George Street. This structure was built of red brick in the Gothic Revival style, with oriel windows and towers. The windows are ornamented with colored bricks and stones. It is an exquisite representation of his style and aesthetic.
Image Courtesy of Wikimedia and John Sutton.
4

The Express Offices on Upper Parliament Street are another masterpiece by Watson Fothergill. The original building was completed in 1876. Initially it had only three floors, but a fourth floor was later added. On the arch above the entrance is the inscription "F.W.", Watson Fothergill's initials. This building is an outstanding mixture of the Old English and Medieval styles.
Image Courtesy of Wikimedia and Andrew Abbott.
5

The Arkwright Building is a great example of 19th-century Gothic Revival architecture. The building was erected in the 1870s as part of University College Nottingham. The exterior of the building features cast-iron crests and the main entrance has a picturesque triple doorway. This elaborate structure has remained well-preserved over the years and is a "must-see" on your trip to Nottingham.
Image Courtesy of Wikimedia and Alexblainelayder.
6

The Nottingham College of Art is part of Trent University and is considered one of the oldest design colleges in the United Kingdom. The building was constructed from 1863 to 1865 and was designed by Frederick Bakewell. It features an elaborate, picturesque facade, beautiful arched windows, and a sumptuous interior.
Image Courtesy of Wikimedia and Alan Murray-Rust.
7

Albert Hall was constructed in 1873. It was intended to be the largest concert hall in Nottingham, but a devastating fire during construction led scaling back the size of the building. After the fire, there was a second attempt to construct the hall. The new Edwardian concert hall finally opened in 1910. The building is a true work of art and is a source of pride for Nottingham residents.
Image Courtesy of Flickr and Angela Connelly.
8

Mortimer House is actually a complex of six houses joined together. The complex was designed by Watson Fothergill in the Old English vernacular style in 1883. It is located near Nottingham Castle. The red-brick structure has a unique roof line and square tower that stands out against its surroundings. The ground floor of the complex currently houses shops and offices.
Image Courtesy of Flickr and shining.darkness.
9

Severns Building is a timber-framed building that formerly stood on Middle Pavement. It was later rebuilt on Castle Road near Nottingham Castle. In 1735 John and James Severn started a wine importing business, and used the building as their offices. Over the years, the structure was expanded, but the medieval section of the building was preserved. The building is a fine example of the classic Tudor style.
Image Courtesy of Wikimedia and Enchufla Con Clave.

Nottingham was known only as "The Place of Caves" in 600 AD. A Saxon chief named Snot ruled "Snotingaham", or, "the home of Snot's people." It was part of Danelaw in the 7th century, administered from a stone Hall on High Pavement, the first street of Nottingham.

There's hardly anyone on this planet who hasn't heard of Robin Hood. Apparently, a Saxon nobleman born in 1160 in Loxley, this hero of numerous ballads, some dating back as far as the 14th century, earned fame by robbing from the rich and giving it back to the poor. A skilled archer and sword fighter as he was, Robin Hood famously defended villagers from attacks by corrupt noblemen,...  view more