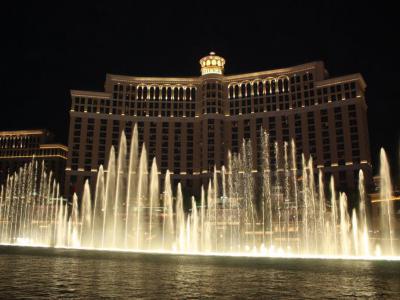 The Fountains of Bellagio is a vast, choreographed water feature with performances set to light and music. The performances take place in front of the Bellagio hotel and are visible from numerous vantage points on the Strip, both from the street and neighboring structures. The show takes place every 30 minutes in the afternoons and early evenings, and every 15 minutes from 8 pm to midnight. Two minutes before a water show starts, the nozzles begin to break the water surface and the lights illuminating the hotel tower turn to a purple hue (usually), or red-white-and-blue for certain music.

Shows may be cancelled without warning because of high wind, although shows usually run with less power in face of wind. A single show may be skipped to avoid interference with a planned event. Additional shows can occur for special occasions including weddings. The fountain display is choreographed to various pieces of music, including “The Star Spangled Banner” by Whitney Houston as the first show of the day, "Time to Say Goodbye" by Andrea Bocelli, "God Bless the USA" by Lee Greenwood, "Your Song" by Elton John, "Viva Las Vegas" by Elvis Presley, "Luck Be a Lady" by Frank Sinatra, "My Heart Will Go On" by Céline Dion, A 3 song medley by Tiesto and "The Sound of Silence" by Disturbed.

The fountains are set in a 8-acre (3.2 ha) manmade lake. Contrary to urban myth, the lake is not filled with treated greywater from the hotel. The lake is actually serviced by a freshwater well that was drilled decades prior to irrigate a golf course that previously existed on the site. The fountains actually use less water than irrigating the golf course did. They incorporate a network of pipes with more than 1,200 nozzles that make it possible to stage fountain displays coordinated with more than 4,500 lights. It is estimated that the fountains cost $40 million to build. The fountains were created by WET, a design firm specializing in inventive fountains and architectural water features.
Image Courtesy of Flickr and dany13.
Sight description based on Wikipedia.