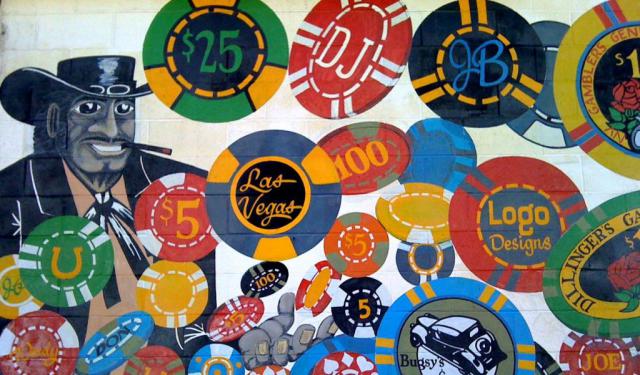 Known for its glitz and glamour, Las Vegas wouldn't be what it is without the involvement of mobster “wiseguys”. There are still a few places in the city, like the El Cortez and Flamingo hotels, that evoke the mob-tinged Vegas heyday and inspired a bunch of Hollywood movies. Take this self-guided tour to see some of the most famous mob spots in fabulous Las Vegas that haven't yet been rubbed out by redevelopment over the years.
Image Courtesy of Flickr and odonata98.
How it works: Download the app "GPSmyCity: Walks in 1K+ Cities" from iTunes App Store or Google Play to your mobile phone or tablet. The app turns your mobile device into a personal tour guide and its built-in GPS navigation functions guide you from one tour stop to next. The app works offline, so no data plan is needed when traveling abroad.

The Mob Museum, officially known as the National Museum of Organized Crime and Law Enforcement, is dedicated to presenting the artifacts, stories, and history of organized crime in the United States, as well as the actions and initiatives taken by law enforcement to prevent such crimes. Opened on February 14th, 2012, the museum is housed in the former Las Vegas Post Office and Courthouse which was built in 1933 and is currently listed on the National Register of Historic Places.

In April 2018, a fully operational speakeasy and distillery was opened at the museum's basement, called The Underground exhibit, paying homage to the Prohibition-era speakeasies with Art Deco design and artifacts from the 1920s related to the Prohibition era as well as the bootleggers, rumrunners, and moonshiners who ensured Americans still had access to liquor during the 13 years of federal “dry” season. The most notable feature of the Underground is a custom-built pot used for distilling in-house 100 proof, 100% corn moonshine which, they say, is “as authentic as it can safely get.” In 2019, the Mob Museum started selling their moonshine – previously available only at The Underground – through Lee's Discount Liquor stores in the Las Vegas Valley.

Indeed, what a better place for a speakeasy than in the basement of the Mob Museum? Each day the museum runs 30-minute tours of the Underground facility, starting at 5 pm. To access The Underground, patrons must ring a bell and provide a password. Once inside, they can order classic cocktails and moonshine, and enjoy live jazz.

Why You Should Visit:
To explore artifacts from law enforcement's epic battle against the bad guys, to sample a variety of in-house distilled spirits (moonshine, vodka and the Jamaica ginger infusion), plus to receive an in-depth explanation of the distillery equipment and distillation process (Prohibition-era bootlegging and rum running), and to learn more about Prohibition and its impact on distilled spirits.

Tip:
Consider adding the firearms simulator option, for it helps to learn more about how a police officer must be prepared to make a life/death split-second decision.


Image Courtesy of Wikimedia and Wtstoffs.
Sight description based on Wikipedia.
2

Opened on November 7, 1941, El Cortez is one of the oldest casino-hotel properties in Las Vegas that is still operating. This relatively small downtown gaming venue features slots, table games, and a race and sports book.

Located just a block from the Fremont Street Experience and Las Vegas Boulevard, back in the day, it was considered too far from downtown. However, it quickly gained profit so much so, in fact, that the notorious mobsters Bugsy Siegel, Meyer Lansky, Gus Greenbaum and Moe Sedway rushed to buy it in 1945 for $600,000. El Cortez is also the place where Siegel learned the ropes of running a casino business himself.

Decades in operation, El Cortez is still thriving. Primarily Spanish Colonial Revival in style, the building reflects a 1952 remodel when the facade was modernized. Upon further renovation and revival, the place got a new tower and a new sign that uses neon – a classic Vegas art form that had fallen out of favor until a recent rediscovery by some hotels and businesses.

On February 22, 2013, the structure was placed on the National Register of Historic Places.
Image Courtesy of Wikimedia and kl91711.
Sight description based on Wikipedia.
3

Other than the great food, this chain rib joint made history back in the early 1980s as the place where the longtime maxim that the mob never carried out a hit in Las Vegas, especially in public, was broken. Normally, they took care of this side of “business” out in the desert, miles away from the city. But rules get broken from time to time, and it sure did happen here on the night of October 4, 1982 when Lefty Rosenthal, a longtime secret manager of the mob-controlled Stardust Hotel, had his Cadillac El Dorado blown up in the parking lot outside Tony Roma’s.

As Rosenthal got in, put the key in the ignition and turned it – Boom! The car was turned into a twisted hunk of charred metal, but miraculously, Rosenthal himself got away pretty much unscathed, save a few minor burns. True to the mob's code, he didn’t cooperate with the police investigation. The actual scene was depicted in the 1995 “Casino” movie, starring Robert DeNiro.

Tony Roma’s closed the outlet in 2014, and the building sat vacant until Larry Flynt, president of Larry Flynt Publications, turned it into an adult store, Hustler Hollywood.
Image Courtesy of Wikimedia and Dirk Ingo Franke.
4

Flamingo Las Vegas (formerly The Fabulous Flamingo and Flamingo Hilton Las Vegas) is the brainchild of the mobster-entrepreneur Bugsy Siegel who had the idea that a resort-style casino out on the road to Los Angeles would attract a higher-class clientele than the Western-themed hotels in downtown Vegas. In late 1945, he and his partners came to Las Vegas piqued by its legalized gambling and off-track betting.

Siegel began by purchasing El Cortez on Fremont Street but his expansion plans were hampered by unfriendly city officials aware of his criminal background, so he began looking for a site outside the city limits. Hearing that Wilkerson was seeking extra funding, Siegel and his partners posed as businessmen and directly bought a two-thirds stake in the project.

Siegel took over the final phases of the construction and convinced more of his underworld associates, such as Meyer Lansky, to invest in the project. Having lavished a great deal of mob's money into it, he reportedly lost patience with the rising costs and reportedly once mentioned to his builder, Del Webb, that he had personally killed 16 men. When Webb appeared scared upon hearing that, Siegel reassured him, "Don't worry – we only kill each other."

Siegel had also built a secret ladder in the "Presidential Suite" to escape, if necessary. The ladder led down to an underground garage where a chauffeured limo was always waiting. Sadly, Bugsy Siegel’s masterpiece didn't save him from getting shot himself in the head after mob bosses, convinced that he was involved in skimming from the investment, ordered him whacked.

The architectural theme of the property is reminiscent of the Art Deco and Streamline Moderne style of Miami and South Beach. Staying true to its theme and name, the hotel includes a garden courtyard which serves as a wildlife habitat for flamingos. The hotel opened in 1946, flopped, re-opened and became a success. The Flamingo is the oldest resort on the Strip still in operation and the last remaining local casino opened before the 1950s that is still in business.

There is a memorial to Bugsy Siegel on the ground of the hotel, next to the Wedding Chapel.
Image Courtesy of Wikimedia and LasVegasGuy.
Sight description based on Wikipedia.
5

Until 2013, the Tropicana Las Vegas Hotel on the Strip housed the popular, yet ill-fated show, called Las Vegas Mob Experience, outlining the influence of organized crime on the creation of the world’s most important gambling city.

The interactive tour chronicled the rise and fall of the Mafia in the Las Vegas Valley, mixing entertainment with history, storytelling, artifacts and technology. Visitors were taken on a journey through the world of organized crime, interacting with live character actors and 3D holograms of famous mob movie icons and celebrity gangsters, such as James Caan, Frank Vincent, Tony Sirico and Mickey Rourke. The Experience also featured original photos, videos, letters, personal effects and other artifacts belonging to the infamous gangsters, such as Benjamin "Bugsy" Siegel, Meyer Lansky, Sam Giancana, Tony Spilotro, Mickey Cohen, Charles "Lucky" Luciano and Joey Aiuppa.

The hotel itself had been in and out of financial troubles for a good 25 years bouncing around a succession of owners and managers, some legitimate and some not so much, linked to the mob in Chicago, Milwaukee and Kansas City, until eventually it got a $180 million renovation.
Image Courtesy of Flickr and dherrera_96.
Sight description based on Wikipedia.