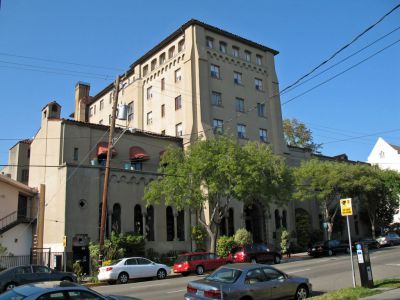 The Berkeley City Club was commissioned as the club house of the Berkeley Women's City Club organized in Berkeley, California in 1927 to contribute to social, civic, and cultural progress. This private club is no longer restricted to women, and the club house building is available to the public at large for overnight stays, weddings and other occasions. On the second floor, the Club also houses Julia's Restaurant and Morgan's Bar & Lounge.

The building, constructed in 1929 and officially opened in 1930, is one of the outstanding works of noted California architect Julia Morgan. The San Francisco-born Morgan was the first woman to gain admission and earn a certificate from the Ecole de Beaux-Arts in Paris (1902) and the first licensed female architect in California. She designed nearly 100 women's-organization buildings throughout her career.

Her interpretation of Moorish and Gothic elements in the Berkeley Women's City Club created a landmark of California design. It is registered as California Historical Landmark[1] and is listed on the National Register of Historic Places . Today the building is administered by the Berkeley City Club Conservancy.
Image by Sanfranman59 on Wikimedia under Creative Commons License.
Sight description based on wikipedia