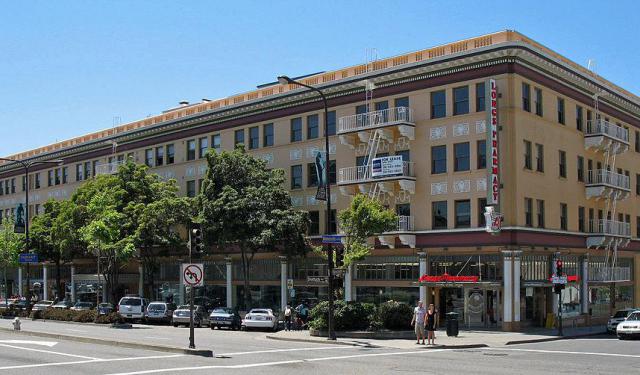 Image by Sanfranman59 on Wikimedia under Creative Commons License.

Berkeley is famous for the amount of wonderful structures it has listed in the National Register of Historic Places. Churches, old private houses, buildings of historical importance and other impressive edifices are all representative of Berkley’s architectural beauty. Take this self-guided walking tour to explore the most notable historical landmarks in Berkeley.
How it works: Download the app "GPSmyCity: Walks in 1K+ Cities" from iTunes App Store or Google Play to your mobile phone or tablet. The app turns your mobile device into a personal tour guide and its built-in GPS navigation functions guide you from one tour stop to next. The app works offline, so no data plan is needed when traveling abroad.

The William R. Thorsen House, often referred to as the Thorsen House, was built in 1909 in Berkeley, California by William Randolph and Caroline Canfield Thorsen. Designed by Henry and Charles Greene, in the American Craftsman style of the Arts and Crafts Movement, the House is considered as the last of four Greene & Greene designed ultimate bungalows and is the only one located in Northern California.

Image by © B. Kim Barnes on Flickr under Creative Commons License.
Sight description based on wikipedia
2

The First Church of Christ, Scientist, built in 1910, was designed by Bernard Maybeck. Featuring Romanesque, Byzantine and Gothic styles, it is acknowledged as Maybeck's architectural masterpiece. This church preserves its original impressive appearance created by the natural colors of the roof and pillars, the ornaments and stencil work, and the translucent window.

The First Church of Christ, Scientist is the only building in Berkeley that has been designated a National Landmark. It is the highest honor that can be given a structure or site in the United States.

Image by Coro on Wikimedia under Creative Commons License.
3

The Berkeley City Club was commissioned as the club house of the Berkeley Women's City Club organized in Berkeley, California in 1927 to contribute to social, civic, and cultural progress. This private club is no longer restricted to women, and the club house building is available to the public at large for overnight stays, weddings and other occasions. On the second floor, the Club also houses Julia's Restaurant and Morgan's Bar & Lounge.

The building, constructed in 1929 and officially opened in 1930, is one of the outstanding works of noted California architect Julia Morgan. The San Francisco-born Morgan was the first woman to gain admission and earn a certificate from the Ecole de Beaux-Arts in Paris (1902) and the first licensed female architect in California. She designed nearly 100 women's-organization buildings throughout her career.

Her interpretation of Moorish and Gothic elements in the Berkeley Women's City Club created a landmark of California design. It is registered as California Historical Landmark[1] and is listed on the National Register of Historic Places . Today the building is administered by the Berkeley City Club Conservancy.
Image by Sanfranman59 on Wikimedia under Creative Commons License.
Sight description based on wikipedia
4

The Corder Building was built in the Classical Revival style in 1921. Designed by the well known Berkeley architect James W. Plachek, this warm sand colored structure with white columns and balconies is notable for its fine white adornments. The building's sheer size and elegance lend the neighborhood a heightened degree of urban dignity. Its presence filled in a previously empty block in the downtown area and was a major step forward in the development of the city's burgeoning business district.

Architect James Plachek played an important role in the development of downtown Berkeley in the late 1910s and 1920s. His work include the central branch of Berkeley Public Library, UC Theatre, and Alameda Courthouse. The Corder Building is listed in the National Register of Historic Places.
Image by Sanfranman59 on Wikimedia under Creative Commons License.
5

The Masonic Temple in Downtown Berkeley is a historic building listed on the National Register of Historic Places. It is located at 2105 Bancroft Way at the corner of Shattuck Avenue, just one block west of the University of California, Berkeley. The Classical Revival style building, designed by William H. Wharff, was built in 1905.

The building was built for Berkeley's Masons, who started a local lodge in 1882 and formed the Berkeley Masonic Temple Association to build the temple. In 1944, the building was converted to a bank. The ground floor of the building is now unoccupied and the remaining floors are used by University staff, including the California Center for Innovative Transportation and the National Writing Project.

The building was added to the National Register on July 15, 1982.
Image by Sanfranman59 on Wikimedia under Creative Commons License.
Sight description based on wikipedia
6

The Tupper and Reed Building was erected in 1906 to house John Tupper and Lawrence Reed's music store. Located on Shattuck Ave, this building was designed by William Raymond Yelland in his storybook house style. Built from brick and wood, it features balconies, a fireplace, impressive adornments and an iron cutout of this landmark building’s name.
Image by Sanfranman59 on Wikimedia under Creative Commons License.
7

The Berkeley Public Library is the public library system for Berkeley. It consists of the Central Branch, the North Branch, Claremont Branch, South Branch, and West Branch.

Berkeley Public Library opened in 1893 on Shattuck Avenue with 264 books. In 1905, the library moved to a new brick building on Shattuck Avenue at 2090 Kittredge Street. The new library was funded by Andrew Carnegie and built on land donated by Rosa M. Shattuck, the widow of Francis K. Shattuck. Immediately following the 1906 San Francisco earthquake and the resulting population surge from across the Bay, the library opened four other branches around Berkeley.

In 1930, the library was demolished and a new design from architect James W. Plachek was approved. Construction of the new building began in 1931. The new central library opened in 1934, where it remains.
Image by Sanfranman59 on Wikimedia under Creative Commons License.
Sight description based on wikipedia
8

The Berkeley Chamber of Commerce Building, with twelve stories, was the tallest structure of its kind when it was built in 1927. It was city's first skyscraper. Designed by Walter H. Ratcliff, Jr., it has housed the Chamber of Commerce, American Trust Bank, and today houses Wells Fargo Bank. It is notable for its brick design, excluding the ground and top floors.
Image by Sanfranman59 on Wikimedia under Creative Commons License.
9

The Studio Building is a historic building, listed on the National Register of Historic Places. It dates back to 1905, and at the time of its building was the tallest building in downtown Berkeley. It was built by Frederick H. Dakin, for use by his real estate investment company. The architect is not recorded.

The building is five stories tall and built of masonry with a tiled mansard roof and rounded upper floor window bays. The first-floor bays, used as shop fronts, were originally built in the form of a series of alternating rounded and pointed arches, although some of these have since been covered. The building's name is set into the tile floor at the entrance, and derives from the fact that the top floor of the building was designed as artists’ studios.

The building was restored in the late 1970s, and has been on the National Register of Historic Places since 1978.
Image by Sanfranman59 on Wikimedia under Creative Commons License.
Sight description based on wikipedia
10

Also known as Thornburg Village, Normandy Village is a Berkeley landmark home to unique apartment buildings designed by Jack Wood Thornburg. Its former architect was William Raymond Yelland, known for his storybook design. Erected in 1927, each building has its own history. Today, Normandy Village is designated a City of Berkeley Landmark.
Image by Ken Osborn on Flickr under Creative Commons License.
11

The Cloyne Court Hotel built in 1904, often referred to simply as Cloyne, is one of the houses of the Berkeley Student Cooperative (BSC), a student housing cooperative in Berkeley, California. It is located at the north side of the University of California, Berkeley campus on Ridge Road.

Cloyne is the largest non-apartment style property in the BSC, itself the largest housing co-op organization in North America, housing 140 UC Berkeley students (119 during summer), mostly undergraduates[citation needed]. Despite its size the house is student-run and student-governed. Members contribute 5 hours of workshift per week each for various tasks needed for the operation of the house: cooking, cleaning, house maintenance, gardening, etc. House's council, house's governing body where all members democratically make decisions pertaining the house, meets every Sunday.

Cloyne is also known for its murals covering many of its internal walls. Murals have been made through years by members residing in the house. The building is listed in the National Register of Historic Places as well as a City of Berkeley Landmark.
Image by Kirk Abbott on Wikimedia under Creative Commons License.
Sight description based on wikipedia
12

On the corner of Hearst Avenue and Gayley Road lies the Founders' Rock, the spot, according to college lore, where the 12 trustees of the College of California, the nascent University of California, Berkeley, stood on April 16, 1860, to dedicate the property they had just purchased. This is, supposedly, the same spot where Frederick Billings stood in 1866 when he remembered Bishop Berkeley's verse - "Westerward the course of empire takes it way" -- and thus inspired the name of the new city. A plaque was put on this spot on Charter Day in 1896.
Image by Kirk Abbott on Wikimedia under Creative Commons License.
Sight description based on wikipedia

The campus of the University of California is the core of Berkeley's treasures. Its design is the result of a 1898 architectural competition. Buildings possess their unique history and have their own stories to tell. Follow this self-guided campus tour to appreciate the architectural beauty of this world renowned higher education institution.