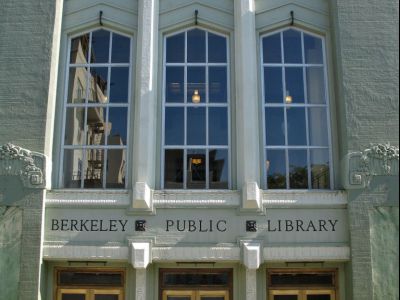 The Berkeley Public Library is the public library system for Berkeley. It consists of the Central Branch, the North Branch, Claremont Branch, South Branch, and West Branch.

Berkeley Public Library opened in 1893 on Shattuck Avenue with 264 books. In 1905, the library moved to a new brick building on Shattuck Avenue at 2090 Kittredge Street. The new library was funded by Andrew Carnegie and built on land donated by Rosa M. Shattuck, the widow of Francis K. Shattuck. Immediately following the 1906 San Francisco earthquake and the resulting population surge from across the Bay, the library opened four other branches around Berkeley.

In 1930, the library was demolished and a new design from architect James W. Plachek was approved. Construction of the new building began in 1931. The new central library opened in 1934, where it remains.
Image by Sanfranman59 on Wikimedia under Creative Commons License.
Sight description based on wikipedia