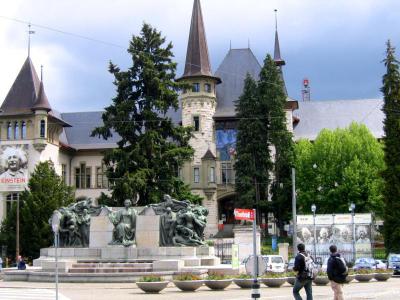 The Bern Historical Museum (German: Bernisches Historisches Museum) is the second largest historical museum in Switzerland. It was designed by the Neuchâtel architect André Lambert and built in 1894. Since it was initially conceived as the Swiss National Museum (which the city of Zurich was later chosen to host), the architect took as his model various historic castles from the 15th and 16th centuries. An extension to the original museum building was completed in 2009.

The museum contains collections related to the history of Bern from prehistoric times to the present and other artefacts on permanent display from Asia, Oceania, America, and Egypt. One of the most remarkable items in the collection is the Muri statuette group, a group of six Gallo-Roman bronze figurines.

First conceived as a temporary exhibition in 2005, the Einstein Museum became a museum dedicated to the life and work of Albert Einstein, who developed the Relativity Theory while living in Bern. The house where he lived (Einsteinhaus) in this period is also open to the public but is located elsewhere in the city and charges separate entry fees.

Why You Should Visit:
The Einstein exhibit has a great number of Einstein artifacts and goes into a very detailed history of his life and work while also trying to explain special & general relativity in an understandable way.
The main collection, centered on local history, covers some rather universal themes, has some excellent historical room recreations and also a beautiful montage of Bern's "plague drawings".

Tip:
Entry to the Einstein Museum (located on the building's top floor) costs more than the general museum entry, but includes both.
Renting an audio guide is not absolutely necessary as most of the times there's a text with explanations next to each display.
Make sure you climb the spiral staircase to the 'turret' to enjoy excellent views across the river to Bern's lovely buildings and landmarks.