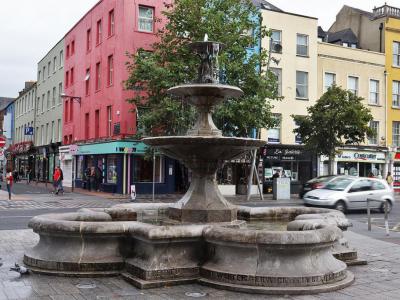 The city of Cork is filled with structures that are architectural delights and have a stories that run back well in the history of the city. One such structure is the Berwick Fountain that stands ornately on the Grand Parade Street in Cork. Built in 1860, the fountain was designed by Sir John Benson and named after Sergeant Walter Berwick, the Chairman of the Quarter Session court, who came to the city in 1847. The fountain was formally presented to John Arnott, the Mayor of the city of Cork on the 1st of January 1862 by Berwick himself.

As the story goes, Judge Berwick was very popular amongst Corkonians and the people of the county. Already established in the hearts of the locals, he became much more popular and venerated on joining the bankruptcy court. Warmed by the affection and gratitude he received from the people of the city, he presented this ornamental fountain as a token of his appreciation.

The fountain stands close to the former site of the statue of King George II. Although regarded as a symbol of gratitude and beauty in the city, the Berwick fountain has had its share of problems as well. In the nineteenth century, the water supply in the city was frequently interrupted rendering the fountain filthy and unfit for display. It was only after Berwick voiced his anguish about the state of the fountain that serious measures were taken to improve the situation, after which it was presented to the Mayor in 1862.

Today, the Berwick Fountain is a common landmark in Cork where people meet up.
Image by JarlVanHoother on Wikimedia under Creative Commons License.