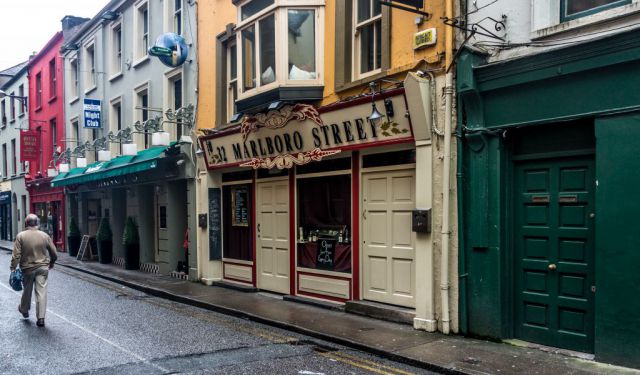 A truly fun way to explore the city, the Cork Heritage Pub Trail takes you on a journey through time while enjoying great pints of Irish ale and hardy pub food. The city of Cork has a long history, and some of this history can be found in its modern pubs. From an old pharmacy to a former gentleman’s club, modern establishments make good use of the antiquated architecture and each pub included on this trail has a unique story to tell.
Image Courtesy of Flickr and William Murphy.
How it works: Download the app "GPSmyCity: Walks in 1K+ Cities" from iTunes App Store or Google Play to your mobile phone or tablet. The app turns your mobile device into a personal tour guide and its built-in GPS navigation functions guide you from one tour stop to next. The app works offline, so no data plan is needed when traveling abroad.

A great place to hear live traditional Irish music, the words ‘sin é’ come from the Gallic meaning ‘That’s it,’ which was meant to refer to the funeral home located next door to the pub. Opening its doors way back in 1889, this bars roots run quite deep in the city of Cork, and it has attracted loads of tourists over the years to enjoy its history, as well as its traditional folk sounds and good selection of beer. These traditional sounds can be found at Sin É each Tuesday evening at 9:30, as well as Friday and Sunday nights starting at 6:30. Live music including modern genres such as rock and reggae can be found here as well on other nights of the week. A small bar, its intimate appeal attracts a crowd on the weekends.
Image Courtesy of Flickr and William Murphy.
2

The Long Valley Bar is located in the heart of Cork City. With a long history serving local customers as well as visitors from overseas, you can be sure you’ll always get a great pint and a hearty sandwich at the Long Valley!

The Long Valley was established as far back as 1842. The bar was bought by the present owners, the Moynihan family, back in 1927. Of these three generations the first owner was Peadar’s grandfather John Moynihan. The bar was originally believed to be a firing range prior to the British occupation back in the early 20’s.

When parts of Cork city was extensively burned by the unwelcome Black & Tans (many of them convicts conscripted into the British Army) the Long Valley, at the time a favourite haunt for British soldiers, remained untouched. Going right back in time the building was used as a stable for horses used by the General Post Office which still stands to this day just across Oliver Plunkett Street.

This is one of those exceptional, family-run, old-fashioned bars that you fall in love with as soon as you enter -- or even before. To the left of the entrance hallway is a snug with etched-glass doors and chased-silver doorknobs. Those doors came from the Celtic, a White Star ocean liner that ran aground in Cork Harbor. Inside the main bar is one long, low-slung room with a polished wooden bar running its full length. The barmen wear white butchers' coats, Victorian-style, and provide a constant supply of pints to the laid-back, predominantly 30-something crowd. ***PH***

A stop along the Cork Heritage pub trail, the Crane Lane Theatre was converted from a former gentleman’s club in the center of Cork. This club takes its inspiration from the music of Tom Waits, including design elements from the twenties and thirties and elements of a burlesque cabaret. Smoking is available in what is considered to be one of the area’s best beer gardens. Three additional bars are located inside as well. Music includes jazz and blues, as well as country, fold and more performed by live bands seven days a week, as well as DJs spinning favorites between sets. Other special events include burlesque performances and theater acts. Sponsored events at the Crane Lane Theatre include the Cork Jazz Festival and the Southern Gothic Festival.

Another entry on the Cork Heritage Pub Trail located on Pembroke Street, Arthur Mayne is a fantastic wine bar located inside a former pharmacy of the same name. Its décor includes displays of vintage items found inside a pharmacy, including old cameras and old pharmacy ledgers and prescription labels. This club includes a state-of-the-art wine tasting system that allows guests to quickly sample a multitude of fine wine offerings the bar has available. Coffee and food is also available at this location during the daytime, with the crowd heating up in the evening to sip any one of its fine wines from around the world in an elegant atmosphere. Be sure to arrive early in order to get a place in this busy, swank wine bar for the evening.
Image Courtesy of Flickr and John Seb Barber.
5

Located off St. Patrick’s Street, the Mutton Lane Inn is one of the city’s oldest drinking establishments. A stunning mural by famed local artist Anthony Ruby lines the alleyway which was commissioned by the city council and the pub’s owner. Inside the Mutton Lane Inn its atmosphere is created by its wood furnishings, exposed ceiling beams, and intimate candlelight. Housing just a small centralized bar with seating areas flanking it, bar patrons are often found outside in the alleyway when the bar gets particularly packed on the weekends. Service is well-reputed for bars in the area and the staff is considered one of the city’s friendliest, welcoming both locals and guests from out of town.

Situated on the corner of South Main and Tuckey Streets, the Oval gets its name from its remarkable oval designed ceiling. One of the most popular pubs in the city of Cork, the Oval was designed for the Beamish and Crawford Brewery, which was formerly located across the street. The bar includes an open pit fire and guests are generally greeted by the smell of whisky and peat. This popular pub offers a variety of music to entertain its guests and sees a good crowd come in, particularly on the weekends, so be sure to arrive early in order to get a spot. Offering a friendly atmosphere with a warm and inviting staff, the Oval is just a great place to hang out and chat with friends, unfettered by the flashiness of many modern bars.
Image Courtesy of Flickr and William Murphy.
7

Located across from the Beamish Brewery in the heart of historic Cork City, An Spailpin Fanac dates back to 1779. A splendid old dwelling with low ceilings, exposed brick walls, and open fireplaces, An Spailpin Fanac is known in the city of Cork as one of the best places to hear live traditional Irish music. Patrons will find the atmosphere of this pub relaxed and friendly. Offering great service, this is the perfect spot to meet up with friends and throw back a few pints while enjoying the traditional sounds of Ireland.
Image Courtesy of Flickr and William Murphy.
8

Blending both traditional elements and a modern flair, the Vicarstown Inn is designed with a long and narrow design which is reminiscent of the medieval era from which the building originates. Featuring intimate, dark corners for lounging with a selection from its diverse drinks menu, the Vicarstown Inn also possesses a large, heated beer garden and smoking area which rivals the best ones in the city, with its old walls worn with time adding an historic air to this great Cork pub. The Vicarstown Inn is also a popular meeting place for club goers on their way to nearby dance clubs.

The Franciscan Well is an Irish pub and microbrewery, and a true rareness as such. A pub has stood on this site for as long as locals remember. The name derives from the fact that a Franciscan abbey stood here once upon a time. Now it is a protected historic site with an ancient well on the grounds. The brewery operates year round and produces four types of beer: Blarney Blonde, Shandon Stout, Hefewiesen, and Rebel Red. The bar has done well benefiting from its near downtown location and has a spacious, covered beer garden in the rear with often BBQ parties during the summer period. The pub itself is just as commodious and clad in plain wood and copper elements which produce quite modern, US-style microbrewery atmosphere.
Image Courtesy of Flickr and William Murphy.