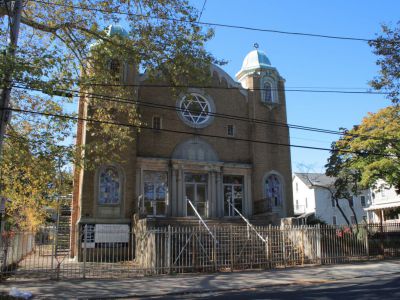 Beth Israel, also known as the Orchard Street Shul is a synagogue in New Haven. The congregation was founded in 1913 by an orthodox congregation that was formed in 1913 by Jewish families who had prospered sufficiently to move beyond the neighborhood of first immigrant settlement around Oak and Lafayette Streets to the area of upper Oak Street (renamed Legion Avenue in 1928) and Winthrop Avenue.

First meeting in leased space, in 1915, the congregation moved into a remodeled house at 147 Orchard Street. In 1923 they purchased a lot at 232 Orchard Street for $12,000 (today $164,000) and built the present Colonial revival style building in 1925. The architect was Louis Abramowitz and the builder was C. Abbadessa. By the late twentieth century, the membership was elderly, the Jewish population of the city had moved elsewhere, and the future of the synagogue was in doubt. Efforts to preserve the synagogue are organized by the Cultural Heritage Artists Project. The synagogue was listed on the National Register of Historic Places in 1995.
Image by Sage Ross on Wikimedia under Creative Commons License.
Sight description based on wikipedia

This sight is featured in a self-guided walking tour of New Haven, Connecticut within the mobile app "GPSmyCity: Walks in 1K+ Cities" which can be downloaded from iTunes App Store or Google Play. Please download the app to your mobile phone or tablet for travel directions for visiting this sight. The app turns your mobile device to a personal tour guide and it works offline, so no data plan is needed when traveling abroad.