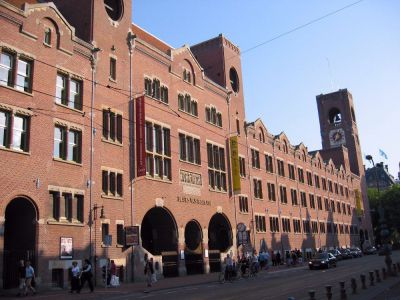 The Beurs van Berlage will be of much interest to those who are intrigued by a city’s architecture. The structure constructed between 1898 and 1903 was built as the stock exchange of Amsterdam. Located in the center of city, the Beurs van Berlage was designed by architect Hendrik Petrus Berlage. Considered as one of the leading architects in Amsterdam, Berlage has contributed to the new wave of modern architectural designs in the city.

Not only is the designer of the building an important figure in the history of the city’s architecture, the Beurs van Berlage itself has influenced many modernist architects and has garnered appreciation from different art schools of Amsterdam. The most unique aspect of the building and its architecture remains its aloof yet simple patterns and designs. Set on the backdrop of vintage Gothic and Renaissance styled buildings, the Beurs van Berlage makes its own stand with its colour, structure and style. Proposed to be ahead of its time, the designs come as a refreshing change and can easily be singled out in the Amsterdam skyline.

Today the building no longer serves as a center for city’s stock exchange but is now used as an exhibition and concert hall. There are also souvenir shops and cafes in the building.
Image by Mtcv on Wikimedia under Creative Commons License.
Sight description based on wikipedia