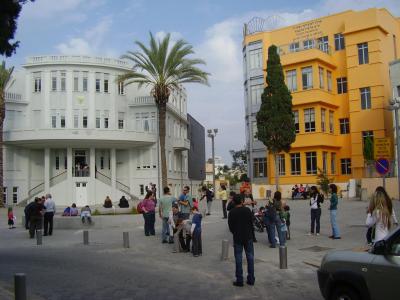 Renovated in 2009, the small round Bialik Square is today a popular place, and together with surrounding buildings is an object of UNESCO World Heritage. More specifically, there are four architecturally-notable museums on its sides, of which one is the house where the greatest Hebrew poet of modern times, Chaim Nachman Bialik settled upon immigrating to Israel; another is the striking "old" town hall now housing exhibits on the city's development; and you also have the Bauhaus Museum and the Liebling Haus, both nicely capturing the essence of a Bauhaus building and inviting to explore their fascinating story from several perspectives.

Historically, the square is an integral part of the eponymous street, itself regarded as an urban museum, with architecture that ranges wildly from eclectic to Bauhaus. When not drawing in locals with a concert or dance party, the charming tree-lined street provides the opportunity for a little intimate stroll; you can spend some time walking around, sip a tasty coffee or go for a traditional meal nearby at a cozy café... Time here stands still if you allow it to, if only for a moment.
Image Courtesy of Wikimedia and Dr. Avishai Teicher.