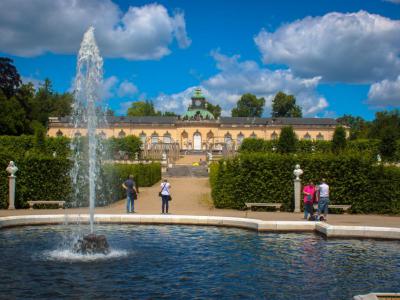 The Sanssouci Park Picture Gallery, known in German as the Bildergalerie, is a museum that displays the art collection of Frederick the Great. Construction was completed in 1764 under the directive of the Prussian ruler. It is known to be the oldest extant museum built for a ruler in the country.

Bildergalerie was designed by Johann Gottfried Buring on the grounds of a former greenhouse. The interior is decorated with gold ornaments, Italian marble and a domed ceiling. Outside, the garden-facing side of the building features statues by Johann Gottlieb Heymuller and Johann Peter Benckert. The statues represent figures from arts and sciences.

Frederick the Great collected paintings throughout his life. French Rococo art, especially those by Antoine Watteau, were early favorites of the ruler. He later collected more Renaissance and Baroque art including works by Rubens, Rembrandt and Correggio.

All of the paintings were moved to Rheinsberg Palace during World War II. Many of the paintings were lost. However, a large collection of paintings confiscated by the Soviet Union was returned in 1958. Some of the portraits in Bildergalerie include the Incredulity of St. Thomas by Caravaggio and Saint Hieronymus and Four Evangelists by Peter Paul Rubens.

Bildergalerie is open from May through October. The gallery's hours are 10 AM to 8 PM Tuesday through Sunday.
Image Courtesy of Flickr and Andy Hay.