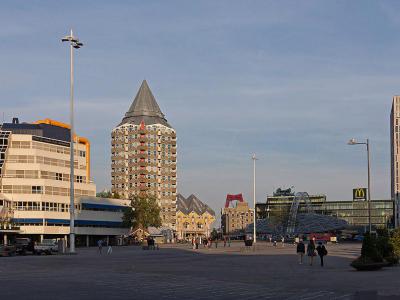 Binnerotte Square's location was originally underwater as part of the Rotte River. However, the arrival of the Rotterdam-Doldrecht train line in 1871 changed the city's infrastructure and landmarks. A railway viaduct was built, and this area became an open, dry space.

The railway viaduct dominated the area. The market was held in a small corner of the square, surrounded by modest buildings. Unfortunately, World War II bombs damaged the old center. Since then, city planners have worked to create a city center. In 1993, the railway viaduct was replaced by a tunnel, and the area was finally transformed into a large new public square.

Binnenrotte Square hosts the Rotterdam Market Center every Tuesday and Saturday. The market features over 450 stalls, and up to 70,000 people visit the market each week. Visitors and residents can shop for vintage items, books, clothes, fresh produce, fish, household wares, and flowers.
Image Courtesy of Wikimedia and Michielverbeek.