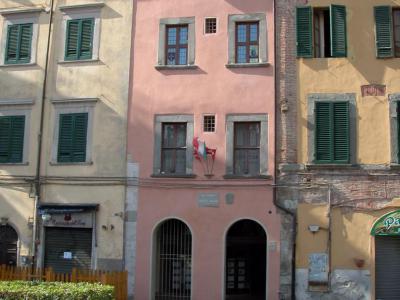 Galileo Galilei was born in 1564. Modern scholars have identified what they believe to be his birthplace, the Ammannati House, named after Galileo's mother's maiden name.

In 1864, as part of the 300th-anniversary celebrations of Galileo's birth, historians identified a home near the church of the Fortress as Galileo's birthplace. However, historians had not taken into account that only children of soldiers were born in this area.

More recently, scholars re-examined historical documents and believe Galileo was born on Via Giusti in a home belonging to his mother, Giulia Ammannati.

In 2020, a bronze statue of Galileo Galilei was placed in Largo Ciro Menotti, just a stone's throw from the famous scientist's childhood home. The house is not open to the public, but this is an important landmark in Pisa.

Gabriele Vicari is the sculptor behind this inspired work. Instead of being represented as an older man, this sculpture represents Galileo in the prime of his life. He stands with a telescope and a celestial sphere.
Image by Bruno Barral on Wikimedia under Creative Commons License.