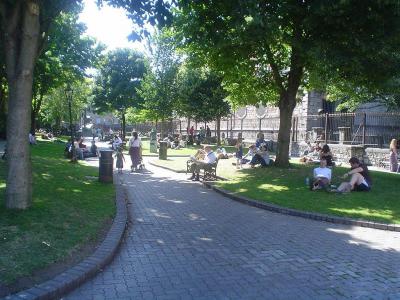 If you fancy long walks in the park where you are surrounded by peace, tranquillity and nature then Bishop Lucey Park is a must visit. One of the few green areas in the city, the park is popular among locals and visitors. Not only is it noteworthy because of it greenery and beauty but the Bishop Lucey Park is also archeologically and historically very significant.

The Bishop Lucey Park was opened in celebration of Cork’s completion of 800 years of being awarded a city status. The park was named after Bishop Cornelius Lucey who served as the bishop of Cork for more than 30 years.

The entrance of the park is adorned with an archway which was the same that led to the City Corn Market on Anglesea Street. This entrance was specially reassembled to place as the entrance of the park. Other interesting features in the park include the Bronze fountain and The Onion Seller. The Bronze fountain designed by John Behan (1938) comprises of eight beautiful swans that celebrate the 800 years to Cork’s establishment. The Onion Seller, cast in bronze is a monument to the women working at the Coal Quay open market.

The Park is also a huge reservoir of historical and archaeological wealth. During the development of the park in 1984 archaeologist stumbled onto a stone wall that was believed to be the remains of the Hopewell Castle, one of the defence towers of the city. at the same timel, shards of Pottery from Normandy and other regions that dated back to the 17th century were also excavated. These now reside in the Cork Public Museum.
Image by pl:Wikipedysta:A. on Wikimedia under Creative Commons License.