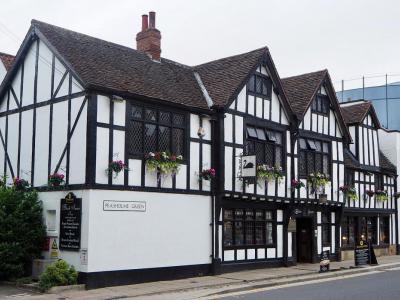 One step inside the Black Swan makes you understand why it is considered the most authentic pub in York to enjoy local brew.

The public house sits on Peasholme Green, on the site of an important medieval house which used to be occupied by various Lord Mayors of York and Members of Parliament. The original building dates back to 1417. In 1560 it was rebuilt, and in 1670 saw further substantial alterations: rebuilding parts in brick, and altering the interior.

In the late-18th century the property was converted into a pub, although much of its interior survives intact from the 1670 modifications, featuring giant fireplaces, massive staircases, roasting pits and slanted windows in the entrance hall, the Smoke Room, and a room upstairs with a trompe l'oeil painting. Externally, the timber-framed central section of the facade with a jettied first floor, dating from 1560, is still in place also. To its right is a brick and timber extension from 1670, and to the left, an extension built in 1940, with a wing of 1670 behind.

In the 1930s, the pub was owned by the Tadcaster Tower brewery, which undertook a major renovation intended to preserve its historical character. The building later came into the ownership of Bass, and in 1954 was Grade II listed.

One tradition claims that the Black Swan is linked to St Cuthbert's Church by an underground passage. The pub is also said to be haunted by several ghosts. Since 1978, it has hosted a folk music club, and since 2003 – an annual folk festival.
Image Courtesy of Wikimedia and Malcolmxl5.
Sight description based on Wikipedia.