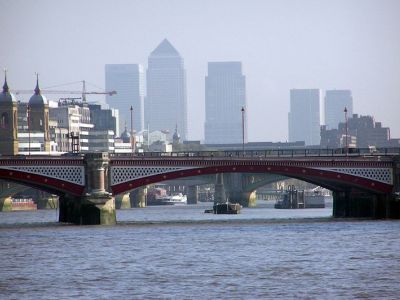 To get to the Tate Modern from the Inns of Court, you will, of course, cross the Blackfriars Bridge, which received Grade II Listed status in 1972. The Bridge House Estates own the bridge and are responsible for its upkeep.

This foot and road bridge is 923 ft long with five wrought iron arches to match its sister railway bridge, now demolished. It was built by the P.A. Thom & Company firm to designs by Thomas Cubitt and was opened by Queen Victoria in 1869.

As you cross, you will notice stone carvings by John Birnie Philip on the piers of the bridge: on the East side the carvings represent marine life, with a variety of seabirds; on the West side you can see carvings of freshwater birds. These birds are there to remind us that the Thames is both a sea and fresh water river.

The bridge takes its name from an earlier bridge that was used by the Blackfriars, a Dominican Order of friars who wore black habits, rather than the more usual brown ones. They had a priory near the site of Blackfriars Station from 1275 until 1538, when it was closed by King Henry VIII during his Dissolution of Monasteries campaign.