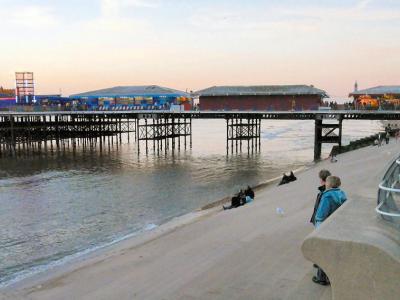 South Pier (originally known as Victoria Pier) is one of three piers in Blackpool. Located on South Promenade on the South Shore, the pier contains a number of amusement and adrenalin rides. It opens each year from March to November and is owned by Six Piers Limited. The Blackpool South Shore Pier & Pavilion Co. Ltd. was registered in November 1890 and work began to build the pier in 1892.

Victoria Pier was considered to be more "upmarket" than North and Central piers, and at first provided little entertainment. The pier now contains numerous rides including dodgems, Crazy Mouse and a waltzer, the Laughing Donkey Family Bar, which has live entertainment, a Kiddies Ride Arena, as well as the Adrenaline Zone which houses: "Skycoaster", a freefalling swing at a height of 38 m; "Skyscreamer", a Reverse Bungee ride; "Spider Mountain", a multi-storey climbing spiders web; and "Maxibounce", an acrobatic, safety harnessed trampoline.
Image Courtesy of Wikimedia and Jon Bennett.
Sight description based on Wikipedia.