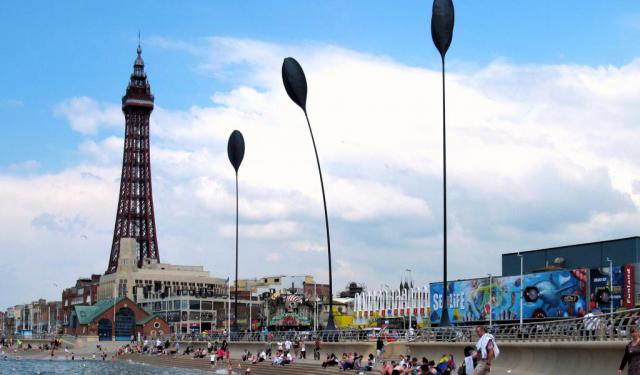 Sitting on the Irish Sea shore, Blackpool is a prominent seaside resort and a major tourist center in northwest England. As such, the city is famous primarily for its waterfront with old-school amusements, of which the most notable, of course, is the 1894-built Blackpool Tower. Still, there are other sights in the city worthy of attention just as well. To see what they are, follow this orientation walk and find out.
Image Courtesy of Wikimedia and Nathanemmison.
How it works: Download the app "GPSmyCity: Walks in 1K+ Cities" from iTunes App Store or Google Play to your mobile phone or tablet. The app turns your mobile device into a personal tour guide and its built-in GPS navigation functions guide you from one tour stop to next. The app works offline, so no data plan is needed when traveling abroad.

The Blackpool Cenotaph War Memorial is a prominent city landmark located near the Metropole Hotel. On the front side of the memorial, you will see the inscription: "In Memory of Our Glorious Dead, 1914-1918, 1939-1945". The Blackpool Cenotaph War Memorial commemorates all those who gave their lives in conflicts in Korea and the Falklands.
Image Courtesy of Wikimedia and Ian Petticrew.
2

North Pier is the most northerly of the three coastal piers in Blackpool. Built in the 1860s, it is also the oldest and longest of the three. Although originally intended as a promenade, competition forced the pier to widen its attractions to include theatres and bars. Unlike Blackpool's other piers, which attracted the working classes with open air dancing and amusements, North Pier catered to the "better-class" market, with orchestra concerts and respectable comedians.

Until 2011, it was the only Blackpool pier that consistently charged admission. As of 2012 it is still in regular use, despite having suffered damage from fires, storms and collisions with boats. Its attractions include bars, a theatre, a carousel and an arcade. One of the oldest remaining Sooty glove puppets is on display commemorating Harry Corbett buying the original puppet there. North Pier was built at the seaward end of Talbot Road, where the town's first railway station, Blackpool North, was built. Its name reflects its location as the most northerly of Blackpool's three piers. It is about 450 yards north of Blackpool Tower, which is roughly the midpoint of Blackpool's promenade.

Image Courtesy of Wikimedia and Green Lane.
Sight description based on Wikipedia.
3

Blackpool Town Hall is a beautiful, historic building located on Talbot Square. This government building was constructed with brick and stone between 1895 and 1900 by the firm Potts, Son and Hennings. It was designed in the Jacobean style and has a slate roof and symmetrical facade. At the center of the building is a large clock tower. Inside, the town hall features marble walls, mosaic floors, and a statue of Queen Victoria, which dates back to 1904.
Image Courtesy of Wikimedia and Green Lane.
4

The Church of Saint John the Evangelist or St John's Church is an Anglican church in Blackpool. It was completed in 1878. A church was built on the site in 1821 and was replaced by the current building to accommodate a larger congregation. It was dedicated to John the Evangelist and consecrated on 6 July 1821 by George Law, the Bishop of Chester.

The church was designed by Garlick, Park and Sykes in the Early English style from yellow stone, with slate roofs and ashlar interiors. The tower is at the south west of the building and has four stages and angled buttresses which are topped with pinnacles and finials. On each wall of the tower are two tall Belfry louvres. It has been restored and renovated in 1986 and from 2000–2006. St John's is an active parish church in the Diocese of Blackburn and the archdeaconry of Lancaster.

Image Courtesy of Wikimedia and Alexander P Kapp.
Sight description based on Wikipedia.
5

The Winter Gardens is a large entertainment complex in the town centre of Blackpool. It has twelve different venues, including a theatre, ballroom and conference facilities. Opened in 1878, it is a Grade II listed building, incorporating various elements built between 1875 and 1939. It is operated by Crown Leisure Ltd, on behalf of Blackpool Council, which purchased the property from Leisure Parcs Ltd as part of a £40 million deal in 2010.

The Winter Gardens has hosted the main annual conferences for all three major British political parties as well as a number of trade unions. The Winter Gardens owners claim that every British Prime Minister since World War II has addressed an audience at the venue. It has also been the venue of the Blackpool Dance Festival since its inception in 1920 and has hosted the World Matchplay darts tournament every July since 1994.

Image Courtesy of Wikimedia and Green Lane.
Sight description based on Wikipedia.
6

The Friends of the Grand supports the Grand Theater and its programme of events. Formed in 1973 to save the building from demolition, the first Friends were literally ‘hands-on’. They painted the dressing rooms, repaired holes to the ceiling and helped to get the theater into shape. The role of the Friends of the Grand has changed over the years. They now raise funds from subscriptions and social events to finance projects within the theater. The Friends are also the founding angel of the National Theater of Variety.
Image Courtesy of Wikimedia and Tony Hisgett.
Sight description based on Wikipedia.
7

The top of the tower is known as The Blackpool Tower Eye. It was previously known simply as the "Tower Top", until it reopened on 1st September, 2011, having closed down the previous year for refurbishment, as part of the renovation of the entire Blackpool Tower complex, during which it was acquired by Merlin Entertainment.The original ballroom, the Tower Pavilion opened in August 1894. It was smaller than the present ballroom and occupied the front of the tower complex. The tower is a member of the World Federation of Great Towers.
Image Courtesy of Wikimedia and Dave Green.
Sight description based on Wikipedia.
8

Opened to the public in 1979, the Blackpool Sea Life Center is located on the famous Promenade. At this popular attraction, you can discover the fascinating world of the sea. The center has an extensive collection of fish and other ocean creatures, as well as the world’s largest display of sharks. The Blackpool Sea Life Center is a great place to take the whole family. It is open Monday - Friday from 10 am to 5 pm, and Saturday and Sunday from 10 am to 6 pm.
Image Courtesy of Wikimedia and David Ingham.
9

Louis Tussaud's Waxworks is located on the Promenade, just opposite Central Pier. This cultural venue houses a huge number of wax models, which are presented in eight themed rooms on four separate floors. The wax models are mainly of popular celebrities from around the world. The museum was founded by Louis Tussaud, the great-grandson of the famous Madame Tussaud. Louis Tussad arrived from London in 1900 to create his own wax gallery in Blackpool. Don’t forget to bring a camera, so you can take a picture with your favorite star!
Image Courtesy of Wikimedia and Green Lane.
10

Central Pier is one of three piers in the town of Blackpool. The pier is central in that it is located between the other two, but it was close to the site of the now-defunct Blackpool Central railway station about 500 metres south of Blackpool Tower. Since the coastline is very straight and flat, the pier simply extends at right angles to the sea front, roughly level with the promenade.

Central Pier is constructed mostly of cast iron with wooden decking. The piles on which the structure rests were driven using the screw pile method pioneered by Eugenius Birch. This involved twisting screw-tipped cast iron piles down through the sand until they hit bedrock. The materials and building techniques were similar to those used for North Pier but the structure of Central is a little more delicate in appearance. The pier has suffered relatively little damage save for fires in 1964 and 1973 which gutted the theatre buildings. The main structural alterations have been the removal of the obsolete 120-metre low tide jetty in 1975 and the construction of the ferris wheel in 1990. The addition of the wheel required the mid-section of the pier to be strengthened to cope with the extra weight.
Image Courtesy of Wikimedia and Green Lane.
Sight description based on Wikipedia.