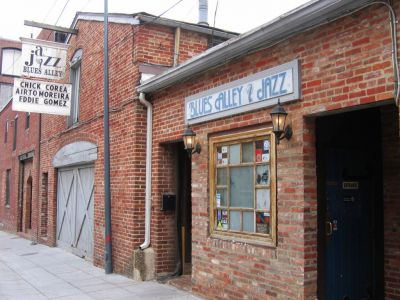 Blues Alley, founded in 1965, is a jazz dinner-and-nightclub. Exclusively jazz musicians are booked into Blues Alley for approximately 360 nights out of the year. Throughout decades, many of the world's greatest jazz and blues players have graced with place, including Nancy Wilson, Sarah Vaughan, Charlie Byrd, Maynard Ferguson, and Eva Cassidy. In 1975 Earl Fatha Hines spent a week, during the afternoons while the club was closed, making an hour-long solo film for British TV entirely in Blues Alley, prominently featuring Frank Hart, Blue's Alley's famous “clean-up man”.

Blues Alley honors its most popular performers by allowing them to create dishes and have them as a regular part of the restaurant's menu. Phyllis Hymans jumbo shrimp dish is one of the most popular items on the menu. Not all performers have this honor and it is shared with the greats, such as Nancy Wilson and John Williams.
Image Courtesy of Wikimedia and Rudi Riet.
Sight description based on Wikipedia.