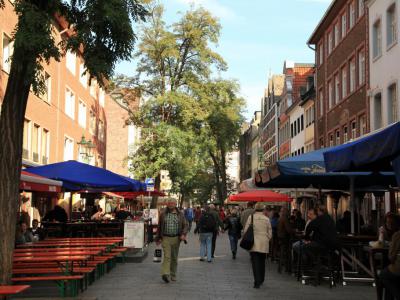 Bolker Street is one of Dusseldorf's oldest streets, first built in 1384. At around 300 meters here are over 50 bars, pubs, and restaurants, owing to which the street is considered to be the heart of the "longest bar in the world", which is the nickname awarded to Düsseldorf's Altstadt (Old Town).

Bolker Street used to be a vital business, shopping, and residential destination. Back in the day, merchants and craftsmen settled here in great numbers and sold their goods. The city's first department store, on Bolker Street, was built in 1896 and further expanded in 1905. The store was destroyed during World War II and then replaced by the current Schneider-Wibbel-Gasse building.

Since the 1960s, many commercial outlets have been replaced by restaurants and bars. Presently, Bolker Street is a pedestrian-only area, lined with numerous eateries and watering holes, many of which offer outdoor seating, facing the street, all year round.

There are over 60 historical buildings on Bolker Street, including the Hausbrauerei Zum Schlüssel Brewery, producing the legendary Schlüssel-Alt beer since 1850. Opposite the brewery is the 1684 Neander Church; its churchyard regularly transforms into a beer garden on weekends.
Image Courtesy of Wikimedia and Frank Vincentz.

Want to visit this sight? Check out these Self-Guided Walking Tours in Dusseldorf. Alternatively, you can download the mobile app "GPSmyCity: Walks in 1K+ Cities" from iTunes App Store or Google Play. The app turns your mobile device to a personal tour guide and it works offline, so no data plan is needed when traveling abroad.

Create Your Own Walk in Dusseldorf

Creating your own self-guided walk in Dusseldorf is easy and fun. Choose the city attractions that you want to see and a walk route map will be created just for you. You can even set your hotel as the start point of the walk.

The scenic Rheinuferpromenade (Rhine Promenade) is the lifeline of Dusseldorf. Currently one of the most beautiful places in the city and a very popular destination for both locals and tourists, this approximately 1.5-kilometer-long embankment was developed between 1990 and 1997 to a design by architect Niklaus Fritschi.

The project was easily one of the most successful waterfront...  view more

Just as London has given us Porter, Dublin – Stout, Burton – the original (English) IPA, and Cologne – Kolsch, Dusseldorf has contributed to the world of beers its signature Altbier. They say, Dusseldorf and Altbier go together like onion rings and blood sausage. Curiously enough, though, this delicious, cool-fermented and malty brew, ranging in color from dark brown to copper, is not...  view more

The area at the confluence of the Rhine and Dussel rivers was on the outskirts of the Roman Empire and settled by Germanic fishing tribes. It is from these small beginnings that the town takes its name. "Dorf" translates to "village" in English. The city of Dusseldorf has since grown far larger than that original eighth-century fishing village.