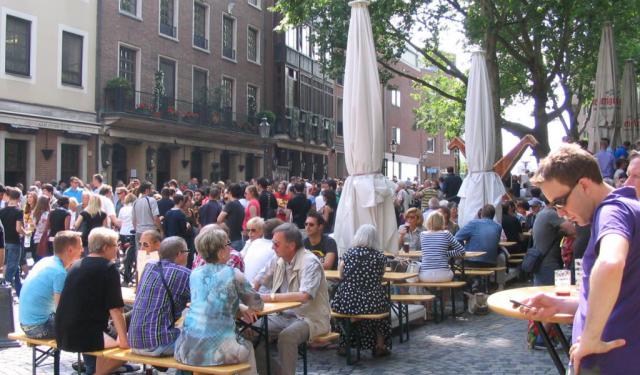 Just as London has given us Porter, Dublin – Stout, Burton – the original (English) IPA, and Cologne – Kolsch, Dusseldorf has contributed to the world of beers its signature Altbier. They say, Dusseldorf and Altbier go together like onion rings and blood sausage. Curiously enough, though, this delicious, cool-fermented and malty brew, ranging in color from dark brown to copper, is not particularly well-known outside of Dusseldorf itself.

Despite the lack of widespread recognition, Dusseldorf's Altbier is certainly well appreciated and ubiquitous throughout the city. The name “alt” literally means old. The Altstadt (Old Town) in Dusseldorf is the epicenter of local beers and undoubtedly the best starting point to sample Altbier. Nicknamed “the longest bar in the world”, the Altstadt is packed with 300 or so bars and pubs, each peddling Altbier as their primary beverage.

The bulk of the country’s Altbier is both brewed and drunk right here. It's no wonder that there are several legendary breweries venerated as local landmarks.

Uerige Brewery – their Altbier is one of the oldest, extremely distinctive and the most bitter of all the alt varieties produced in Dusseldorf.

Schlüssel Brewery – the history of this brewpub, the smallest of the four traditional breweries in the Old Town, goes back a few centuries.

Im Goldenen Kessel - The Schumacher Brewery – translating as “The Golden Kettle”, this is one of the oldest bastions of Dusseldorf beer production.

Kürzer Brewery – this “new kid on the block” opened its doors only in 2010.

Im Füchschen Brewery – the “Little Fox”, deeply rooted in tradition, has been around since 1640.

If you feel like a bit of pub crawling, while in Dusseldorf, do it in style with the help of our self-guided walking tour.
Image Courtesy of Wikimedia and Kürschner.
How it works: Download the app "GPSmyCity: Walks in 1K+ Cities" from iTunes App Store or Google Play to your mobile phone or tablet. The app turns your mobile device into a personal tour guide and its built-in GPS navigation functions guide you from one tour stop to next. The app works offline, so no data plan is needed when traveling abroad.

Bolker Street is one of Dusseldorf's oldest streets, first built in 1384. At around 300 meters here are over 50 bars, pubs, and restaurants, owing to which the street is considered to be the heart of the "longest bar in the world", which is the nickname awarded to Düsseldorf's Altstadt (Old Town).

Bolker Street used to be a vital business, shopping, and residential destination. Back in the day, merchants and craftsmen settled here in great numbers and sold their goods. The city's first department store, on Bolker Street, was built in 1896 and further expanded in 1905. The store was destroyed during World War II and then replaced by the current Schneider-Wibbel-Gasse building.

Since the 1960s, many commercial outlets have been replaced by restaurants and bars. Presently, Bolker Street is a pedestrian-only area, lined with numerous eateries and watering holes, many of which offer outdoor seating, facing the street, all year round.

There are over 60 historical buildings on Bolker Street, including the Hausbrauerei Zum Schlüssel Brewery, producing the legendary Schlüssel-Alt beer since 1850. Opposite the brewery is the 1684 Neander Church; its churchyard regularly transforms into a beer garden on weekends.

Uerige Brewery is a brewpub in the old town region of Duesseldorf. The earliest record of an establishment on the site appeared in 1632. At that time, the location was run by a baker, Martin Putz, and an innkeeper, Dietrich Pfielsticker.

Uerige didn't become a brewery until 1862 when Hubert Wilhelm Curten bought and expanded the building. The expansion included narrow hallways, strange niches and haphazard additions that have given the brewery a unique appearance. It was Curten's proprietorship that also led to the naming of Uerige Brewery. In German, the word "uerige" means "grouch," which was a nickname bestowed upon the reportedly bad-tempered Curten.

The brewery was damaged during World War II but has been completely restored. It continues to use the gravity dispensing method from wooden casks for pouring its draught beers. The brewery is open to the public from 10 am to midnight seven days per week. Those above age 16 are welcome to enjoy the distilled beer and whiskey.
Image Courtesy of Wikimedia and Marek Gehrmann.
3

Schlüssel Brewery is a brewery located in the heart of Duesseldorf. It occupies two houses on Bolkerstrasse, number 45 and 47. One of these dates to 1632 when it was called "Zu den drei Konigen" or, in English, "The Three Kings." The house was originally owned by Johann von Monheim.

The brewery was established in 1850 when Jakob Schwenger took ownership and opened a brewery and bakery. When brewer Josef Aders bought the place, he also purchased the house next door to create Schlüssel Brewery. It was inherited by Karl Gatzweiler in 1936 and has remained in the Gatzweiler family since that time.

Schlüssel, meaning "key," gets its name from the custom of keeping keys to the town gates in local public houses. Schlüssel Brewery is open daily from 10 am to 10 pm. The brewery remains open until midnight from Wednesday through Friday. Visitors can also take guided tours of the brewery on evenings and weekends. Advanced reservations are required.
Image Courtesy of Wikimedia and DerHexer.
4

Im Goldenen Kessel, or "The Golden Kettle" in English, is a restaurant in Duesseldorf's old town. The former brewery has retained its old-world charm right down to the golden kettle that rests above the entrance. However, it has not retained the actual brewing of beer. Instead, beer is brought to the restaurant and put on tap for patrons to enjoy.

The building was destroyed in 1942 by air raids but was rebuilt in 1948. It has been renovated and expanded many times over the years. The brewery has continued to innovate its beer while the building has enjoyed success in both brewing and gastronomy.

Kürzer Brewery is a newer brewer in Duesseldorf. Established in 2010, Kürzer Brewery was opened by Hans-Peter Schwermin as a mini-brewery to rival some of the long-standing brewers in the region.

This trendy bar is very popular with locals. Known as an Altbier brewery, the small establishment focuses on brewing the type of beer that found its start in the region. Altbier is a top-brewing beer that was first brewed in the Schumacher Brewery in 1838. It is a fruity, crisp beer that is only produced in eight breweries in the city.

Kürzer Brewery is open daily from noon to midnight. The kitchen opens at 6 pm.
Image Courtesy of Wikimedia and Ray eye.
6

The tiny pub doesn't have a lot of decoration but it still manages to have a great deal of style. Much of that comes from the cozy atmosphere that allows for lively conversation or enjoying loud music.

The brewery offers a surprisingly large array of beers for its size. It also offers wine and numerous spirits, including specials like the salmiakki. Native to nordic regions, salmiakki is a salty liquorice liquor that should be tried in small sips as it is a potent and acquired taste. A local favorite is the Gedeck, which is an Altbier with a shot of salmiakki.
Image Courtesy of Freie kommerzielle Nutzung Kein Bildnachweis nötig.
7

Im Füchschen Brewery is a microbrewery and alehouse. Family owned, the brewery uses a family recipe that has been brewed since 1848. German for "in the little fox," Im Füchschen Brewery sits on a location that has steadily held a brewery since 1640. At that time the building didn't have a house number and was simply known for the carving a fox on one of the support beams.

Im Füchschen Brewery was purchased by Theodor and Louise Konig in 1908. It operated for six years before the copper was forcibly removed during World War I. Reopening in 1930 by the children of Theodor and Louise, it operated again for a number of years before it was destroyed by incendiary bombs during World War II. A full rebuild was completed in 1950 by Peter and Johanna Konig.

The brewery is one of only eight in Duesseldorf that brew Altbier onsite. It is currently operated by Peter Konig Jr.
Image Courtesy of Wikimedia and Marek Gehrmann.

Create Your Own Walk in Dusseldorf

Creating your own self-guided walk in Dusseldorf is easy and fun. Choose the city attractions that you want to see and a walk route map will be created just for you. You can even set your hotel as the start point of the walk.

The scenic Rheinuferpromenade (Rhine Promenade) is the lifeline of Dusseldorf. Currently one of the most beautiful places in the city and a very popular destination for both locals and tourists, this approximately 1.5-kilometer-long embankment was developed between 1990 and 1997 to a design by architect Niklaus Fritschi.

The project was easily one of the most successful waterfront...  view more

The area at the confluence of the Rhine and Dussel rivers was on the outskirts of the Roman Empire and settled by Germanic fishing tribes. It is from these small beginnings that the town takes its name. "Dorf" translates to "village" in English. The city of Dusseldorf has since grown far larger than that original eighth-century fishing village.