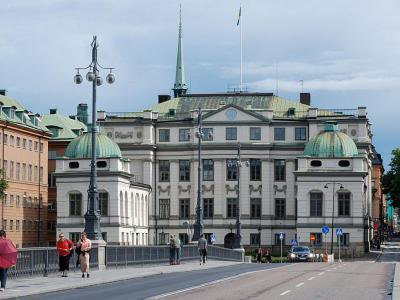 Arguably, the most prominent monument of the Swedish Empire (1611–1718) era, the Bonde Palace (Bondeska palatset) was originally designed by Nicodemus Tessin the Elder and Jean De la Vallée in 1662-1667 as the private residence for the Lord High Treasurer, Gustaf Bonde. In the 18th century it accommodated the Stockholm Court House and since 1949 has housed the Swedish Supreme Court.

The original design by Simon de la Vallée and Tessin the Younger, was based on French Baroque and Renaissance prototypes commonplace in the 17th century, featuring H-shaped plan with two southern wings flanking the main court, and northern wings surrounding a small Baroque garden. It also had an exquisite, tall, steep-pitched, copper-dressed roof covering the central building surrounded by cupolas of the corner pavilions, with facades decorated with massive Ionic pilasters, festoons and portraits of Roman Emperors dotting the walls.

Following the devastating fire of the royal palace Tre Kronor in 1697, the Royal Library and the Svea Court of Appeal were lodged in the Bonde palace. Its original elaborated roof was destroyed by fire in 1710, while the original cupolas survived. In 1730, the palace was finally bought by the city as the seat for the Town Hall.

In this capacity, the palace commenced its central role in the Swedish legal history by witnessing several dramatic events, such as the public flogging of the regicide Jacob Johan Anckarström on April 27, 1792, and the mob beating, kicking, and trampling the statesman Axel von Fersen the Younger to death in 1810.

During the 19th century, the building gradually failed to accommodate the court house, fell into decay and by 1920 had found itself on the brink of demolition. However, in 1925 it was restored. In the 1940s, the building underwent further comprehensive restoration, followed by series of others in 1986 and 2003–2004, carefully recreating its 17th-18th century look using the original materials and craftsmanship to the maximum. Today, the building is classified as a historical monument of national interest and maintained by the Swedish National Property Board (Statens Fastighetsverk).
Image by Ankara on Wikimedia under Creative Commons License.
Sight description based on wikipedia